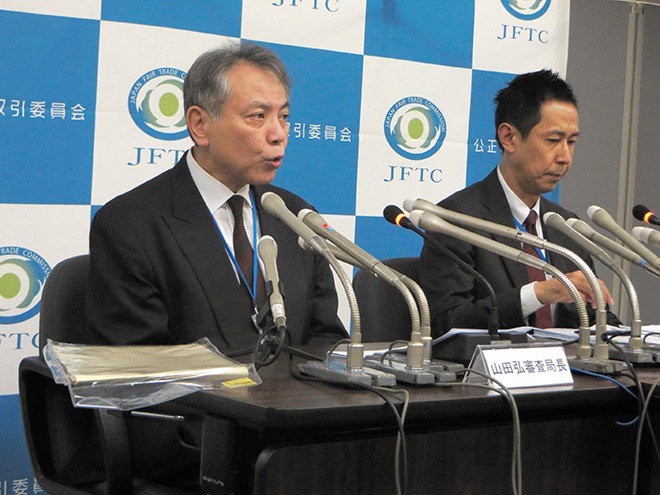 Hiroshi Yamada, director-general for investigation at the Fair Trade Commission, on March 10 announces the decision to withdraw its request for an emergency court order to stop Rakuten Inc.’s free shipping policy. (Hiroshi Nakano)

The nation's antimonopoly watchdog body on March 10 withdrew its request for an emergency court order to stop online retailer Rakuten Inc. from forcing its sellers to adopt a free shipping policy.

The Fair Trade Commission's move follows Rakuten's March 6 announcement that it would postpone introducing the strategy, scheduled to start March 18, citing the spread of the new coronavirus.

Rakuten also pledged it would only start the plan with sellers that are able to introduce it, adding that it will notify the other sellers of its future plans as early as May.

In response, the FTC judged that the immediate threat to sellers had been eliminated and abandoned its pursuit of the court order.

The FTC petitioned the Tokyo District Court for the order on Feb. 28 after some sellers and antitrust authorities claimed the policy could violate the Anti-Monopoly Law and impose a one-sided burden on sellers.

The e-commerce giant had intended to adopt the new policy from March 18 on its online shopping mall, Rakuten Ichiba, and gave free shipping to users who purchase items over a certain amount.

The FTC said it will continue its investigation into Rakuten as the company has stated it could apply the free shipping plan to all its sellers at some point.

If Rakuten again takes steps to force all its sellers to join the plan, the FTC can again seek an emergency court order to thwart it.