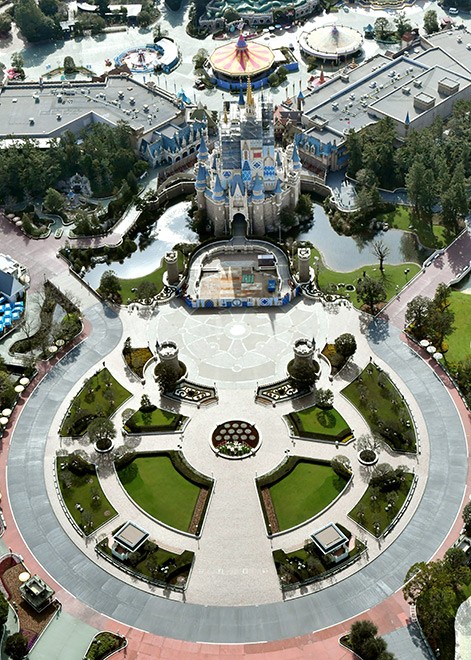 Tokyo Disneyland in Urayasu, Chiba Prefecture, on Feb. 29, the first day of its closure due to the novel coronavirus (Satoru Semba)

Theme parks and performing arts groups have extended their shutdowns as the spread of the novel coronavirus shows no signs of slowing down in Japan.

The operator of Tokyo Disneyland and Tokyo DisneySea in Urayasu, Chiba Prefecture, on March 11 announced that the parks will remain closed into early April. The normally packed parks were shut down on Feb. 29 but were expected to resume operations on March 16.

Similarly, the operator of Universal Studies Japan in Osaka said the movie-based theme park will extend its shutdown through March 22.

USJ has been closed since Feb. 29, with initial hopes of reopening on March 16.

Both theme park operators said their decisions were based on the government’s March 10 request to refrain from hosting sports and cultural events for about 10 more days.

Oriental Land Co., the operator of Tokyo Disneyland and Tokyo DisneySea, said it will announce the reopening dates later, but it indicated the closures will be longer than a month.

Oriental Land said those who have already purchased tickets will receive refunds or extensions of the tickets’ expiration dates.

The Ikspiari mall adjacent to the Tokyo Disney Resort will also remain closed, while hotels around the resort will stay open.

The all-female Takarazuka Revue Co. theater troupe announced on March 11 that shows scheduled at the Takarazuka Grand Theater in Hyogo Prefecture and the Tokyo Takarazuka Theater in the capital’s Chiyoda Ward will be suspended until March 19.

Umeda Arts Theater Co. has decided to refrain from running the musical “Anastasia” in Tokyo until March 19.

The suspension of the kabuki performance “Yoshitsune Senbon Zakura” at the National Theater of Japan in Tokyo’s Chiyoda Ward has been extended from March 15 to 19.

HoriPro Inc. has delayed the March 14 opening of the musical “Sunset Boulevard” until March 20, and said a further postponement is possible.