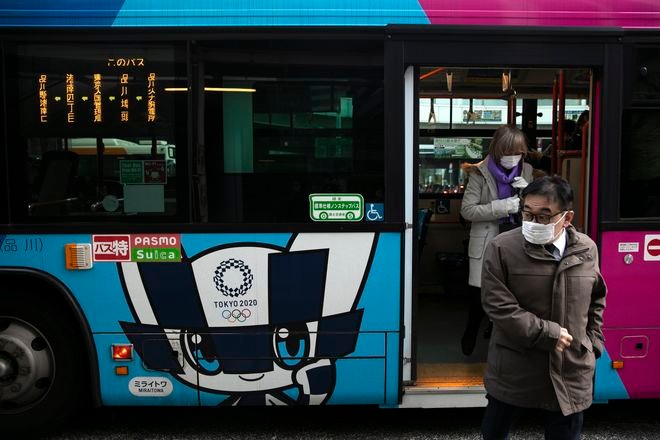 Passengers wearing masks get off a bus with the livery of Miraitowa, the official mascot of the Tokyo 2020 Olympics, in Tokyo on March 5. (AP Photo)

An Olympic organizing committee executive board member said that canceling this summer's Games is “out of the question” because the International Olympic Committee's finances would be endangered if it did not receive TV broadcast revenues.

So, Haruyuki Takahashi suggests postponing the Tokyo Olympics for up to two years due to the coronavirus threat, despite the IOC's insistence that the sporting event will be held this summer.

“The coronavirus outbreak has become a global issue," Takahashi said in an interview with The Asahi Shimbun on March 11. "Even if there are no problems in Japan, that will not mean the Olympics can go ahead as planned. While doing so would be the best option, we have to start thinking about a different plan.”

He stated that it was his personal opinion and did not reflect the consensus of the organizing committee.

Takahashi, a former executive with advertising giant Dentsu Inc., has long been involved in a number of major international sporting events and has been working on the Olympics since the 1984 Summer Games in Los Angeles.

He explained that because the calendar is already booked for other major international sporting events, the summer of 2022 offers the best probability for a postponed Tokyo Olympics.

“If a postponement is being considered, preparations must begin from now or there will not be enough time,” Takahashi said.

IOC HAS AUTHORITY TO CANCEL GAMES

After an IOC executive board meeting in March, Thomas Bach, the IOC president, expressed confidence about the success of the Tokyo Olympics.

Other organizing committee officials have stressed that the overall stance is to go ahead with the Games as scheduled.

But the IOC has the authority to cancel the Olympics. The contract signed by the IOC and the host city has a provision that states an Olympics can be terminated, “if the IOC has reasonable grounds to believe, in its sole discretion, that the safety of participants in the Games would be seriously threatened or jeopardized for any reason whatsoever.”

If the IOC decides to cancel, it would notify the host city of its decision and the contract with the host city would be revoked if the situation does not improve within 60 days. The contract also states that Japan would be forced to abandon its right to seek compensation for the damage caused by the cancellation.

FINAL IMPACT OF A POSTPONEMENT

There has never been a postponement. And if the Tokyo Olympics were postponed by two years as Takahashi has suggested, it would fall in the same year as the men's soccer World Cup. But if the current schedule of a July start to the Tokyo Olympics is moved back two years, it would not coincide with the World Cup, which will be held in November to avoid the summer heat of the host nation of Qatar.

But other issues would have to be addressed if the Tokyo Olympics were postponed.

A major financial burden will be paying for the maintenance of the venues to be used for an additional two years.

A number of new venues have been constructed for the Tokyo Olympics, including the Sea Forest Waterway, where the rowing and canoe sprint events will be held, and the Tokyo Aquatics Center, the swimming venue.

The cost of maintaining those facilities is about several hundreds of millions of yen a year and that expense would have to be covered for the period the Games are postponed.

“There might be a need for several tens of billions of yen in additional spending,” the official said. “I am worried about whether Tokyo residents will accept that.”

A postponement would also affect plans for redevelopment of certain areas as well as management of large exhibition facilities.

The Harumi Flag site in Tokyo’s Chuo Ward will use the Athletes’ Village for the Tokyo Olympics as part of a major residential complex after the Games. Two additional high-rises of 50 stories each will be constructed and a total of 5,632 residential units will be put up for sale.

Plans now call for residents to begin moving in from March 2023, but if the Olympics are postponed that date would also have to be pushed back.

The organizing committee has also reserved thousands of hotel rooms in Tokyo as well as signed rental agreements for about 2,000 buses, mainly from the metropolitan area. Cancellation fees may have to be paid if the hotel rooms and buses are not used this summer.

And while about 80,000 volunteers have signed up for this summer’s event, there is no way of knowing if they will still be able to take part in two year’s time.

Because the overall Olympic budget of 1.35 trillion yen would also balloon, one organizing committee source said, “From a management standpoint, canceling would be a more realistic option than postponing the Olympics.”

Even if the Tokyo Olympics starts as planned, there are now also concerns about the marathon and race walking events to be held in Sapporo, the provincial capital of Hokkaido.

Hokkaido Governor Naomichi Suzuki has declared the main northern island in a state of emergency because it has the largest number of coronavirus infections among all prefectures in Japan.

One high-ranking metropolitan government official said, “Depending on the infection situation, there might be the possibility that the marathon and race walking events are moved back to Tokyo. Tokyo is prepared for that possibility.”

Here’s How Wuhan Tested 6.5 Million for Coronavirus in Days