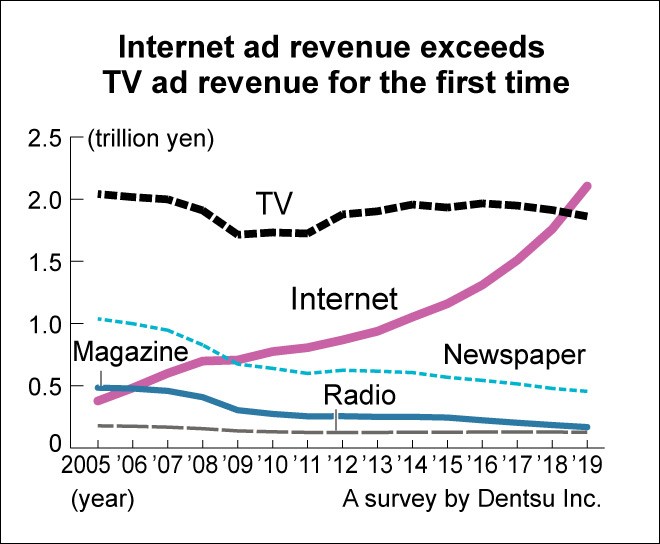 Internet advertising revenue topped cash spent on TV ads for the first time in Japan in 2019.

TV ad revenue from programs fell to 1.8612 trillion yen, down 2.7 percent from a year earlier.

As a whole, domestic ad buyers shelled out 6.9381 trillion yen in 2019 for promotion in mediums including internet, TV and newspapers.

Total ad revenue was up in 2019 for the eighth year in a row, rising 1.9 percent compared to 2018 with the same condition.

Dentsu for the first time estimated the annual amount spent at online shopping sites by shop owners, a total of 106.4 billion yen.

Ad revenue, excluding their internet ad revenue, declined for the fifth consecutive year for TV, newspapers, magazines and radio stations, sinking to 2.6094 trillion yen in 2019. Their combined earnings dropped by 93.2 billion yen, or 3.4 percent, from 2018.

But not all was doom and gloom for traditional advertising providers.

Deadly typhoons and extended periods of rainfall, combined with the introduction of the government's consumption tax hike, led some businesses to cut back on advertising in 2019.

Those aged 65 or older account for record 28.7% of the population