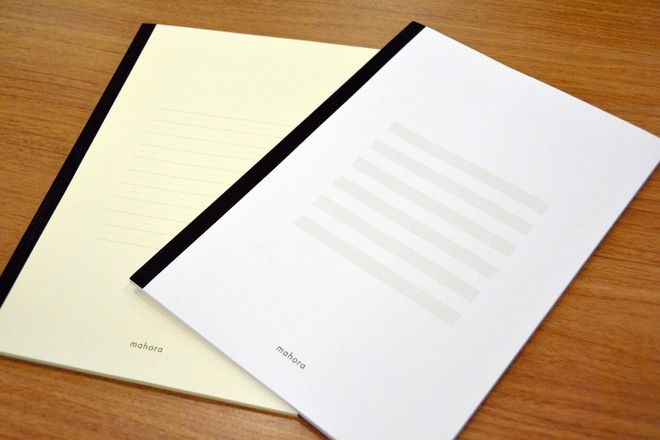 The front covers of mahora notebooks are free from unnecessary patterns with only a small brand name printed on them. (Mayo Tomioka)

OSAKA--When a manufacturer here set out to create a notebook for developmentally disabled people, who are often bothered by pure white pages, decorative lines and date columns, they went right to the source.

Ohguri Shikou, a notebook maker based in Ikuno Ward here, teamed with a patient support group to ask the opinions of about 100 people with developmental disabilities via a survey.

One respondent described "the bright white color of notebook paper as reflective and dazzling," while another pointed out that "unsightly date columns and decorative lines hamper my concentration."

So, Yasuhide Ohguri, 64, president of Ohguri Shikou, has developed a notebook in two color varieties called “mahora” that is free from eye-straining and other elements that could cause trouble to those with developmental problems.

Ohguri Shikou, which is marking the 90th anniversary of its establishment this year, teamed with Yuko Motomura, 49, head of a patient support group in Osaka's Hirano Ward called UnBalance, in the design project.

Motomura, who also has a developmental disability, could not hold back her tears at the sight of the “universally designed” notebook.

"Previously, I had to make do with ordinary notebooks despite their unfriendliness," said Motomura. "I am glad that the voices of us--a minority--were taken into account."

While congenital problems with certain cerebral functions are said to cause the conditions, symptoms greatly differ among different patients, with many extremely sensitive to specific colors and light.

According to the 2016 survey by the health ministry, 480,000 people are estimated to have been diagnosed by their doctors as having developmental disorders in Japan.

A study conducted by the education ministry in 2012 to cover teachers and other staff members at public elementary and junior high schools shows an estimated 6.5 percent of students are suspected to have developmental difficulties and thus require special educational assistance.

NEED FOR THE NOTEBOOK

Ohguri Shikou has long been engaged in the subcontracted production of notebooks at the behest of a large stationery company.

When Ohguri met with a patient last summer at the request of a friend, he learned that commercially available notebooks are difficult for developmentally disabled people to work with.

Among annoyances with various factors posed by notebooks, some children with the condition fail to smoothly write down what teachers speak and show on blackboards, making it difficult for them to do well at school.

"Minor problems could lead to major issues for people with developmental difficulties," said Ohguri. "I thought we might be able to extend a helping hand to them."

The lemon and lavender colors were selected from among more than 10 color samples, because the two hues were popular among those surveyed.

Only a small and simple product name was printed on the front cover, and date columns and decorative lines were removed so such unnecessary elements will not distract users and make it difficult for them to focus on tasks.

The greatest challenge was deciding the width of rows.

The lemon-colored notebook has 1-centimeter-wide rows with lightly printed lines applied at 5-millimeter intervals as well.

The 8.5-mm-wide rows on the lavender notebook are shaded alternately, allowing writers to identify each row more easily.

Notebooks with too narrow rows cause problems for users with developmental disabilities. Some of them could be disturbed by characters they have written beyond the rows and others could move to different rows without knowing it while they are writing on narrow rows.

So employees of Ohguri Shikou showed Excel-made samples with 1-mm-different rows ranging in width from 6 mm to 12 mm to people with developmental problems for the best row arrangement.

A peculiar gizmo was also added to make the notebooks much easier to use.

A 0.2-mm-diameter supplementary dots were placed along the ruled lines at the center of each page of the lemon notebook.

Many commercially available notebooks have dots along the lines at the top and on the bottom of each page, allowing users to draw a straight line by connecting them. The center dots on the new product are expected to enable lines to be easily drawn even with shorter rulers or pen boxes.

The gimmick is the result of the team's efforts to better understand people suffering from developmental disabilities.

"The patients are good at detailed work, and their excellent ability to concentrate enables many of them to be so absorbed in something under certain conditions that they lose the passage of time," said Yusuke Ohguri, 29, a member of the team. "In the questionnaire survey, they carefully shared their opinions using hand-painted drawings and by other means."

After the six-month struggle to develop a notebook, the mahora, the first original product of Ohguri Shikou, was completed late last year.

It was named after a traditional Japanese word "mahoroba," which means utopia.

When finished notebooks, which are made of high-quality, smooth-feeling paper, were presented to adults and children with developmental disorders supported by UnBalance, they quickly started writing and touching them as if sharing the pleasure of the product's completion.

Motomura noted that designs developed out of consideration to specific groups of people are typically friendly to most other individuals as well, pointing to wide station ticket gates for wheelchairs and strollers as well as pictographs understandable for anyone.

"Anyone would be able to use items easily if they are easy to use for developmentally disabled people," she said. "I want more options to be provided to more people so they can choose what they like easily."

On Ohguri Shikou's dedicated website (in Japanese only) at (http://og-shiko.co.jp/mahora/), 4,000 copies of mahora are being sold on a trial basis.