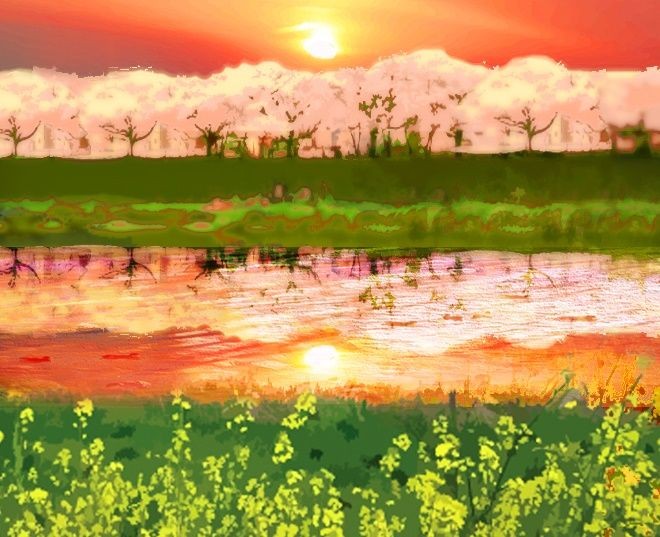 Spring equinox--
so many lives
hanging in the balance
--Lee Nash (Poitou-Charentes, France)

Knowing
the smallness of the globe--
COVID-19
--Teiichi Suzuki (Osaka)

origami
with every fold
a new me
--Vandana Parashar (Panchkula, India)

after the dark--
when all seems lost
rebirth
--Rose Mary Boehm (Lima, Peru)

The haikuist celebrated the autumn equinox today, while the vernal equinox was feted to the north. During today’s solstice everyone equally shares daylight and darkness. Ian Willey’s been caught in a daily pattern; slumping one way or the other.

But at high noon today, when the sun shines directly overhead at the equator, nobody will cast a shadow. Tsanka Shishkova checked the time in Sofia, Bulgaria. Hope sprang eternal for Vandana Parashar. Vincenzo Adamo tried to keep up with his neighbor’s spring cleaning and gardening in Trapani, Italy.

equinox ...
on the clock tower
a new nest

vernal equinox ...
I spot new hair sprouting
after the chemo

Over the next 10 years, Natalia Kuznetsova hopes to discover a new sky in Moscow. Lauris Burns will double down on a late bloomer in Wilmington, North Carolina.

new shades of life
for the new decade ...
divorced

Love like spring blossoms
Worn and enchanting by fall
Was it worth the wait?

Sparrows on a branch
is that the one
we saved?

How does the next haiku make you feel? Perhaps you’ll smile wryly while reading this haiku by Jay Friedenberg a psychology professor and president of the Haiku Society of America.

ice tea glass
a fly lands
on my lip marks

we share a smile
magnolia petal
drifts through the moon

camellia flower
dries on the bough
cooling cup of tea

spring equinox
frogs hasten to the sun
my first teacup

white magnolia
I am pulled
Within

Jane Beal recently visited an aviary, penning this haiku during a birding walk.

at the waterfall
a man asks a woman
to marry him

While browsing in a store, Yutaka Kitajima wrote a curt one-line haiku in reply to this question: “Are you looking for anything in particular, sir?” Thickly clad--the browser short of sincere words. High school student Matthew Varriale studied haiku in a religion class with his teacher Sergio DeMiglio in Toronto.

Ramona Linke was unable to decide if it was raining or snowing in Germany. Roberta Beach Jacobson’s cats sat on the fence for 24 hours in Indianola, Iowa. Zelyko Funda faced a fifty-fifty chance in Varazdin, Croatia. Suraja Roychowdhury knows how to turn a weather report into a haiku in Lexington, Massachusetts.

magnolia buds--
about to bloom--
or about to freeze?

weather report
the will it or won’t it
of snow

Masumi Orihara took advantage of the warming climate when he visited Norway, Sweden, Finland and Russia. When temperatures hovered around zero degrees, he tapped the trunks of betula trees to make syrup.

Earlier in March
in the land of the Sapmi
sapping birch

Maple syrup can be produced from local kaede maple trees in Yamanashi Prefecture, but Orihara prefers plum wine made from the fragrant trees at Soga Orchard in Odawara, Kanagawa Prefecture.

Having overlooked a woman’s affection, Mario Massimo Zontini missed the falling snow and blossoming of trees.

not revealed
the fragrance of plum blossoms
until they scatter

white rose
for the last farewell
of a dear poetess

vernal equinox--
we can finally dream
at the same time

Images outside Alan Summers’ window in Wiltshire, England, had all the makings of a painting by Rene Magritte (1898-1967). Pitt Buerken’s pet explored beyond the norm in Munster, Germany. John Daleiden won’t let his precious play in the Sonoran Desert. Melanie Vance turned on the outdoor spotlights in Dallas, Texas.

our tom loves
the Minka next door, but
the other queens, too

Golda, inside
the glass patio door--
outside, a Tom lurks

missing cat
came back skinny
after a love dance

cat in love
the missing light
is in his eyes

vernal equinox
I move to the other side
of my bed

whatever breeds,
she’s known to love cats
released from a cage

San Valentino--
the tails of two cats
make a heart

Valentine’s day
together alone
neutered cat and me

Daleiden watched warily in Phoenix. Yutaka Kitajima’s favorite shrub turned out to be impotent. Angela Giordano waited in the shade.

Nandina--
no berries atop
spring magic

Murasaki Sagano acknowledged “I’ve learned from my father many things.”

“To see the world”
his habit of saying
winter day trip

Whimsically spinning a spherical model of Earth, Satoru Kanematsu wondered if he’d ever travel outside Japan. Perhaps with that thought in mind, he fell deeply asleep.

The next world
closer than I thought
sunbathing

lent
among the pines
stilled breath

Despite mountain climbing for hours in Lhasa, Tibet, Orihara was struck by the realization that he couldn’t reach the top. In Faro, Portugal Corine Timmer didn’t wish in vain. Neelam Dadhwal’s horse paused for a moment along a trekking path while sauntering uphill toward Zakir Hussain Rose garden outside Chandigarh, India. In 1684, Matsuo Basho composed: michinobe no mukuge wa uma ni kuwarekeri.

a yellow crocus
pushes through the snow--
I whistle a tune

magnolia shade--
me and a bulbul
in a light gig

roadside rose
of Sharon ... eaten
by my horse

Concomitant with the spread of COVID-19, teleworking from home has blossomed. Don Wentworth reflected on the news in Pittsburgh, Pennsylvania, that Japanese cultural events and baseball camps have been curtailed. Fans likely didn’t see the homer Stephen J. DeGuire wrote about in Los Angeles.

manga festival
in a row of doll faces
a mirror

Haikuists seem to be staying at home rather than walking in parks. Kanematsu packed and put away decorations that had been on display. Madhuri Pillai felt a sudden pull at her heartstrings while housecleaning in Melbourne. Lee Nash left early in Poitou-Charentes, France. Rosemarie Schuldes quietly called it a day in Mattsee, Austria.

Hina dolls
put back in the box
“till next spring”

five o’clock
I pack up
the first spring sun

sunset
on empty rows of chairs
and all those melodies

Put haiku on your bucket list of things to do at http://www.asahi.com/ajw/special/haiku/. An Asahi Haikuist Special column appears March 27 to share the results of the Matsuyama Photo Haiku Contest supported by The Asahi Shimbun. The next regular issues of the Asahi Haikuist Network will be published April 3 and 17. Readers are invited to send haiku about herbal tea or hanami on a postcard to David McMurray at the International University of Kagoshima, Sakanoue 8-34-1, Kagoshima, 891-0197, Japan, or e-mail to mcmurray@fka.att.ne.jp.