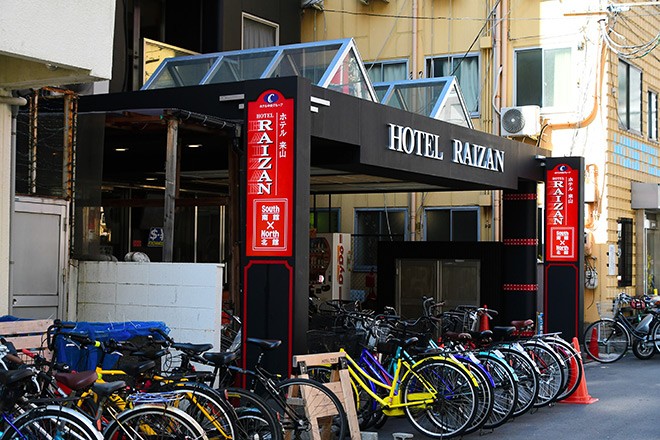 OSAKA--The novel coronavirus does not discriminate based on nationality, but a budget hotel here apparently did.

After being bombarded by criticism, the Business Hotel Raizan, located in the city’s Nishinari Ward, withdrew its plan that allowed guests to book rooms on a “Japanese-only” floor for protection against the contagion.

Hidenori Yamada, president of the hotel, has apologized for the plan, saying its purpose was simply to drum up business at a time when visitor numbers are sharply down because of the coronavirus outbreak.

“I am not going to justify our offer, but I had no intention of discriminating based on nationality,” Yamada said in an interview with The Asahi Shimbun on March 12.

Government officials said the hotel’s offer was not illegal, but some critics were still fuming over the “plan that fuels discrimination.”

Business Hotel Raizan has been popular among foreign backpackers, mainly from China and South Korea, because of its low prices and easy access to the downtown Osaka area.

Before the coronavirus outbreak, half of its guests were Japanese, according to the hotel.
But after the pathogen started to spread around the world, the occupancy rate at the hotel plunged to half.

The hotel said it has received many emails since late February from people in Japan asking if Chinese were staying at the hotel or requesting rooms away from foreign guests.

Yamada said the Japanese-only floor was proposed by an employee who wanted to turn around the occupancy rate.

According to the hotel’s plan, rooms on the floor only for Japanese guests would be available from March 1 through April 11.

“We believe that such an offer will be acceptable because giving discounts only to students and dedicating entire floors only to female guests have been standards in the business,” the hotel said.

It also said guests may be asked to show their passports when they check in.

The plan was carried by leading travel websites, such as Rakuten Travel and Jalan, through March 9.

The hotel was soon flooded with online posts blasting its “flagrant discrimination.”

Some questioned the point of separating floors based on nationality.

Others were sympathetic to the hotel, saying Japanese guests, not hotel staff, were the ones seeking rooms away from foreign travelers.

The hotel stopped accepting reservations for the Japanese-only floor on the afternoon of March 9 and expressed “deep apologies for causing such unpleasantness.”

Yamada told The Asahi Shimbun that he also hopes people will understand that grave concerns about the virus have been fueled by sensationalistic news reports about the contagion.

Rakuten Travel said it could not screen the plan because Business Hotel Raizan was allowed to post it directly to the travel website.

A Rakuten Travel official said that when the company read the plan, it planned to ask the hotel to remove the ad because it could promote discrimination.

But Business Hotel Raizan had already taken it down, the official said.

“Our understanding is that the problem has been resolved,” the official said.

Under the hotel business law, hotels are prohibited from refusing guests unless they are suffering from infectious diseases or likely to commit acts that are illegal or corrupt public morals. But the law contains no clause about rejecting guests based on nationality.

The Ministry of Health, Labor and Welfare and the Osaka city government said the hotel’s action did not amount to a refusal to provide accommodation because non-Japanese customers could still stay in the hotel through other offers.

However, Multi-ethnic Human Rights Education Center for Pro-existence, a nonprofit organization based in Osaka’s Ikuno Ward that addresses problems of discrimination against foreigners, denounced the hotel’s offer as “unacceptable.”

“The plan the discriminatory view that foreigners are the source of infection of the virus,” said Moon Kong Hwi, secretary-general of the organization. “Even if it did not breach the law, it runs counter to the International Convention on the Elimination of All Forms of Racial Discrimination ratified by Japan. It is problematic that authorities are taking a backseat on this issue.”