Aichi zoo to dig well on Borneo for endangered elephants 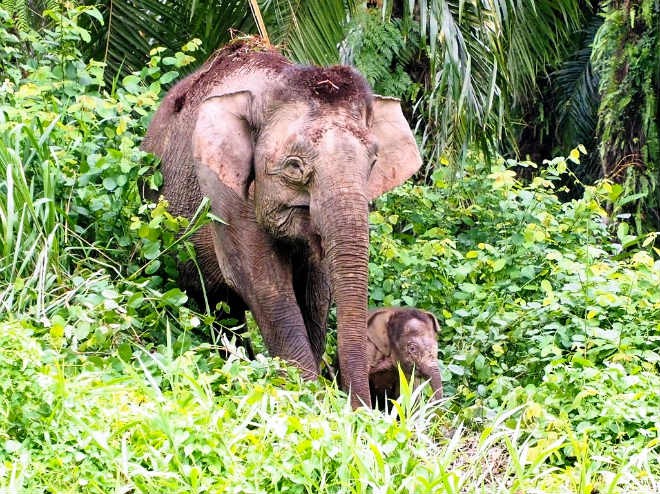 Borneo elephants, a species on the brink of extinction, are seen on Borneo island in Malaysia. (Provided by Toyohashi city)

TOYOHASHI, Aichi Prefecture--A zoo here is helping to dig a well to supply water to an endangered elephant species on a parched island in Southeast Asia.

Personnel of the Toyohashi Zoo and Botanical Park were sent to Borneo island on March 9 as part of efforts to preserve the rich biodiversity there with an eye on contributing to international society.

Under the plan, the staff will set up a water supply system within an animal protection facility in Malaysia's Sabah state where some Borneo elephants are kept.

“We have been making thorough preparations,” said a zoo representative. “We hope the activity will also lead to the transfer of our techniques.”

In August 2018, the Aichi park signed a memorandum with major zoos across Japan, including the Asahiyama Zoo in Asahikawa, Hokkaido, and the Fukuoka Zoo, on board with the plan by a Tokyo-based nonprofit organization called the Borneo Conservation Trust Japan (BCTJ).

The Aichi zoological park and BCTJ, which engages in a campaign to protect the Borneo elephant and other wild animals on the island, are expected to play a leading role in the well construction program.

According to BCTJ, the animal protection facility where a well is planned was jointly developed by BCTJ and the Asahiyama Zoo in 2014, and two adult elephants and one young elephant caught in a plantation and elsewhere live there currently.

As an elephant drinks more than 100 liters of water daily, securing enough water is an urgent challenge to overcome given that Borneo is suffering from a chronic shortage resulting from a rainfall deficit caused by global warming and the breakdown of local water equipment.

The Aichi zoo dispatched three staff members between March 9 and March 16, so a well will be installed at a location within the protection facility to supply water for not only elephants’ drinking and bathing purposes but also washing equipment and various other hygiene objectives.

Under the program, zoo officials learned the Kazusabori traditional well digging technique through training sessions since last summer, and tested their skills by introducing a well on the grounds of the Aichi park.

On Borneo, local workers of the animal protection facility will also lend their support to the elephant well program. They will dig another well with the zoo staff members in a neighboring village, from which elephants' food is delivered.

According to BCTJ, 1,500 to 2,000 Borneo elephants are estimated to inhabit the Malaysian side of the island. As oil palm plantations are largely developed to produce oil, tropical rain forests shrink and disappear, depriving the elephants of their habitats.

Borneo elephants wandering into farms were previously killed as vermin, but any current sightings are reported so they can be captured and protected.

However, cases of ivory poaching have been reported, so countermeasures are considered essential.

Borneo elephants, a species on the brink of extinction, are seen on Borneo island in Malaysia. (Provided by Toyohashi city)

Staff members are trained in the Kazusabori traditional well digging technique at the Toyohashi Zoo and Botanical Park in Aichi Prefecture. (Provided by Toyohashi city)