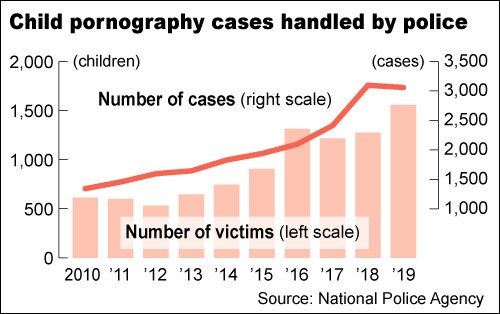 The number of victims of child pornography cases handled by police over the past year hit a record high of 1,559, and the increase noticeably involved junior high school children with access to smartphones, the National Police Agency said.

The figure, an increase of 283 over the previous year, topped the 1,000 mark for the fourth consecutive year.

The largest number of victims involved minors who felt under pressure to send selfies of their naked bodies or in their underwear to adults they had become acquainted with who were trying to "groom" them online.

The NPA is urging parents, guardians and teachers to teach children how to use their smartphones and the internet at home and in school in a way that will not expose them to sexual predators.

The number of victims of sneak photos or videos rose to 381, the second largest among the total, up 86 from a year earlier. The number of victims related to child prostitution and obscene acts stood at 221, while 126 cases involved forced sexual intercourse and forced indecency.

Last year, police acted on 3,059 child pornography cases. The number decreased slightly from the number of cases police handled in 2018, but still topped 3,000 for the second consecutive year.

A breakdown of prurient interest in minors by types of crimes showed that 1,664 cases involved the production of child pornography, such as images of naked children or pictures of them in their underwear. The NPA said 836 cases concerned distribution and public display, such as posting images online. In 559 cases, the intent was to possess child pornography images to provide them to others or to satisfy their sexual curiosity.