Lisa’s In and Around Tokyo: Fujiko F. Fujio Museum--Escape to Doraemon’s magical world 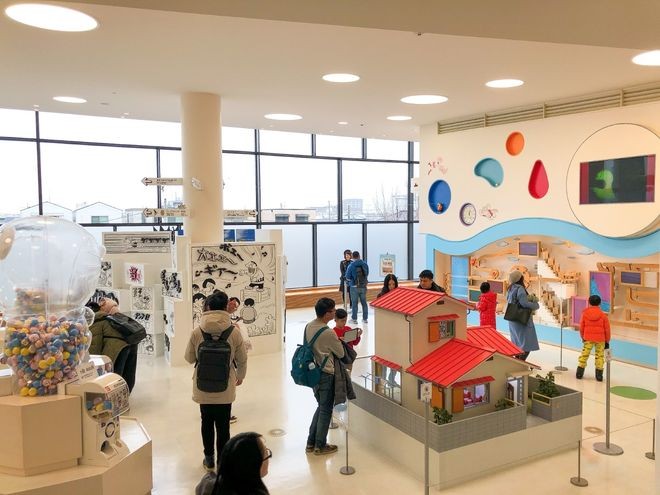 Many intriguing gadgets are displayed along the walls on the second floor of the Fujiko F. Fujio Museum. The red-roofed house is a replica of Nobita’s home, where visitors can take a peek at his messy room. (Photo by Lisa Vogt)

For a super-wealthy, powerful and audacious person, one way to get somewhere else would be to go to a big train station, hop on a Shinkansen, hide in a large musical instrument case, reach an airport, get on a chartered flight, make a transfer or two and ultimately reach your final destination.

Such a scenario is so far-fetched and the stuff of Hollywood, it’s laughable. It’s like saying that you have a friend who is a resourceful blue cat robot with a magical 4-D pocket. And, from this kangaroo pouch, your friend can fish out an Anywhere Door that will open to wherever your heart desires.

Having arrived at the Fujiko F. Fujio Museum without having first purchased a ticket at Lawson in advance for one of four times lots available each day, I had to huff and puff in the pouring rain to a convenience store quite a ways off. Oh, how I wished had a Bamboo Copter to get me there and back. Or, if I had a Small Light, I could shrink myself to the size of an ant and sneak inside the museum.

Wait, a "toriyose" Obtaining Bag to simply reach in and materialize a ticket for the next admission would be the easiest. Oh, so many choices--if I were a brainchild of the manga duo Fujiko Fujio.

Two elementary school buddies, Motoo Abiko and the late Hiroshi Fujimoto, who together used the pen name Fujiko Fujio, collaborated and made the uber-successful manga/anime series and media franchise “Doraemon.” Earlier works include hits such as “Obake no Q-Taro” and “Ninja Hattori-kun.”

Although later in their careers they worked on solo projects, they remained close pals throughout their lives. Abiko later published under the name Fujiko Fujio A, while Fujimoto used Fujiko F. Fujio. Confused?

On the first floor of the museum are Fujiko F. Fujio’s original drawings and an exhibit of the maestro’s study with his beloved desk surrounded by small treasures and his library. On the second floor is a kid’s space where little ones can romp around, a theater with screenings every 20 minutes, a miniature of Nobita’s house and vending machines that dispense small toys in capsules called "gachapon" in Japanese, delightfully translated by Translation Jelly (Honyaku Konnyaku).

And, on the third floor, there’s a museum cafe that serves pizza, pasta, rice and other dishes made to look like Doraemon’s face and a souvenir shop where you can buy “dorayaki” and Anki Pan (Memory Bread) rusks.

If you’re a Doraemon fan, this place is for you.

(The museum is temporarily closed due to the new coronavirus epidemic and has not yet decided when it will reopen.)

This article by Lisa Vogt, a Washington-born and Tokyo-based photographer, originally appeared in the March 15 issue of Asahi Weekly. It is part of the series "Lisa’s In and Around Tokyo," which depicts the capital and its surroundings through the perspective of the author, a professor at Meiji University.