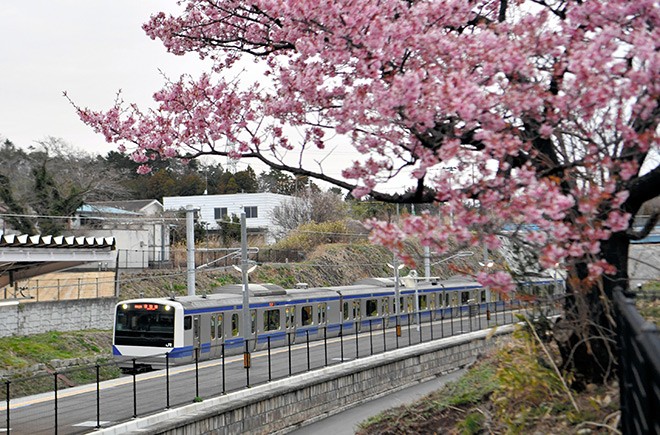 The first train of March 14 arrives at Ono Station on the JR Joban Line in Fukushima Prefecture. (Yosuke Fukudome)

A 21-kilometer section of the JR Joban Line that was suspended because of the Fukushima nuclear crisis reopened March 14, restoring full service between Nippori Station in Tokyo and Iwanuma Station in northern Miyagi Prefecture for the first time in nine years.

The restored portion of the line passes very close to the beleaguered Fukushima No. 1 nuclear power plant that went into triple meltdown in the aftermath of the 2011 earthquake and tsunami disaster.

The reopening of the entire line is hugely symbolic in terms of reconstruction in Fukushima Prefecture, many of whose residents are still living as evacuees.

“The resumption of service on the Joban Line will give a major boost to rebuilding of our town,” said Futaba Mayor Shiro Izawa.

Partial service resumed on different sectors of the JR Joban Line over the years, but now the entire 344-km route is back in service.

The newly restored section covers the area between Tomioka and Namie stations, which is entirely within a 10-km radius of the nuclear plant.

While the evacuation order in place since the triple meltdown at the Fukushima plant was lifted for the newly opened stretch of the Joban Line, 13.6 kilometers of that stretch traverse the “difficult-to-return zone,” where radiation levels remain high.

Evacuation orders were lifted in March for the three stations in Fukushima Prefecture of Futaba, Ono and Yonomori as well as the vicinity of those stations and the roads that provide access to the stations.

A ceremony was held on the morning of March 14 at newly constructed Futaba Station to welcome the first special express train of the day.

Thirteen local government leaders and others took part in the ceremony.

Fukushima prefectural government officials initially had planned a major ceremony involving about 200 participants, but that was canceled due to the coronavirus outbreak.

“I'm so happy that the train service has reverted to its state before the disaster," said a 59-year-old farmer in Tomioka. "I hope local residents and companies will plan various events to attract people to the station.”