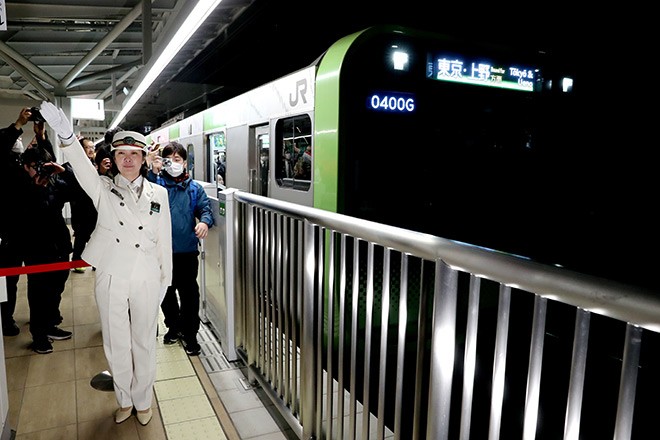 Taka Nakamura, stationmaster at Takanawa Gateway Station, gives the signal to allow the first train on March 14 to leave her station. (Takuya Tanabe)

Takanawa Gateway, the first new station to open in almost 50 years on the JR Yamanote Line in Tokyo, features an exotic blend of Japanese aesthetics and robots that clean platforms, handle passenger queries, locate lost children and even people on the police wanted list.

A special ceremony to mark the March 14 opening was canceled due to the coronavirus outbreak, and an event initially scheduled for March 19 in front of the station was postponed for the same reason.

Takanawa Gateway is the first new station to open on the Yamanote Line since 1971 when Nishi-Nippori was added to the loop. The opening brings the number of stations on the line operated by East Japan Railway Co. to 30. The station is also used by the Keihin-Tohoku Line.

Among the futuristic elements of the Takanawa Gateway Station are robots that can assist passengers trying to figure out how to change trains and also sweep the station. An unmanned convenience store with an automated payment system is due to open within the station complex from March 23.

The vicinity around Takanawa Gateway Station was previously used as a railcar base and lacks the amenities that Tokyoites take for granted.

But that didn't stop 350 or so hardcore railway fans from gathering around 4 a.m. even before the station opened to the public.

Masahiro Nomura, 33, a company employee living in Abiko, Chiba Prefecture, was among the first arrivals. He was impressed by the “strong atmosphere of Japaneseness" that pervades the complex, notably the amount of lumber used, combined with futuristic robots at work.

Gateway is rendered in katakana script, making the station the only one on either the Yamanote or Keihin-Tohoku lines not to entirely rely on kanji characters for its name.

"I think passengers will quickly become accustomed to the katakana name of the station," Nomura said.

Stationmaster Taka Nakamura said she hoped visitors to the station would "enjoy the warmth of the wood" and apologized profusely for the decision to cancel the opening ceremony.

She added that station staff would make every effort to prevent a spread of coronavirus infections by providing hand sanitizing disinfectant.

The station building was designed by Kengo Kuma, the famed architect who also designed the National Stadium that will be the main venue for the Tokyo Olympics.

The three-story facility rises to a height of about 30 meters. The roof is about 110 meters long and was inspired by origami.

To heighten the sense of Japanese taste, lumber from the Tohoku region in northeastern Japan was used for the interior. The tiling for the floor and stairways also has a wood-grain pattern.

The roof allows light to stream in through the atrium, creating an airy feel to the glass-covered concourse.

Four digital signage machines installed within and outside the ticket gates provide information about changing trains and nearby tourist sites.

Passengers needing help are required to voice their destination into a microphone, which will prompt the machine to bring up the person's train route and map as well as the estimated time for reaching it. The data can be sent to a smartphone by scanning the QR code.

Six mobile robots handle security and cleaning. Robots on the security detail are able to detect people using white canes. Once detection is made, the robot can contact human security staff to ensure the individual will be given assistance if necessary.

Facial recognition functions on the robot will allow for finding lost children or even people listed be police as wanted for questioning in crime-related matters.

The cleaning robots use sensors installed throughout the station to determine the level of congestion. This allows them to go about their tasks without interfering with passengers moving around the station.

Wheelchair robots can even transport passengers to the toilet or elevator if a request is inputted into the machine.

The convenience store with a “Touch to Go” automated payment system will be set up within the ticket gate on the second floor. About 50 cameras installed on the store ceiling monitor items selected by customers for purchase. If payment is made by electronic money, such as Suica cards, the exit gate opens automatically.

The store plans to stock about 600 items, including bento box lunches, drinks and snacks.