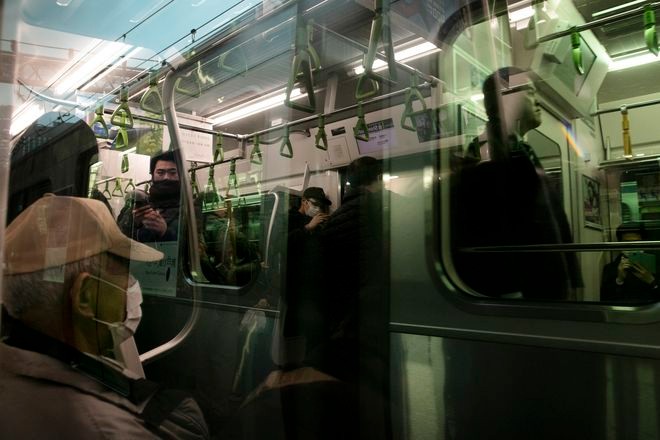 People travel by train in Tokyo on March 2. (AP Photo)

Sixty-three people were newly confirmed as infected with the novel coronavirus, including a family of five in Saitama Prefecture, while a woman in Nagoya died after testing positive.

As of midnight March 14, Japan had 1,484 confirmed coronavirus infections and 29 deaths linked to COVID-19, the disease caused by the virus.

Officials of the Koshigaya city government in Saitama Prefecture said a couple in their 40s and their three daughters under age 20 tested positive for the new coronavirus.

Two of the daughters, in junior high and elementary school, showed no symptoms, but the three other family members complained of sore throats and back pains. The grandmother of the girls was confirmed infected two days earlier.

Japanese who returned from trips abroad were among the 63 new cases.

In Fukushima Prefecture, a female professor at Koriyama Women’s University in her 70s tested positive for the new coronavirus.

Although the university had asked for prior submission of plans to travel overseas, the professor failed to do so and visited Egypt from late February and took a cruise on the Nile River.

As a result of her infection, the university has canceled its graduation ceremony.

The virus was also confirmed in individuals in Tokyo and Nagano Prefecture who had recently traveled to European nations, such as France, Britain and Spain.

Two men in Niigata Prefecture in their 40s and 80s also tested positive. They apparently had no close contact with others who had been confirmed as infected.