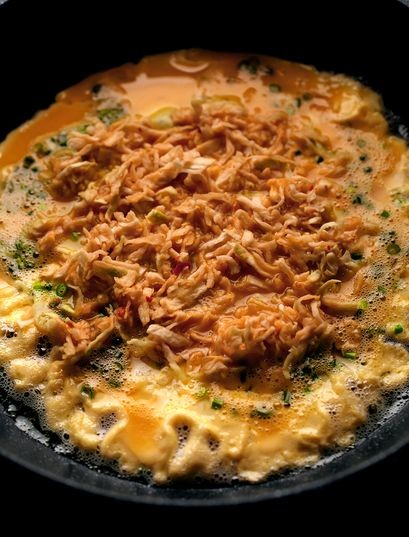 This week we'll teach you how to make an omelet popular in Taiwan highlighted with dried radish.

Daikon is packed with umami and nutrition. The versatile ingredient can be enjoyed simmered or sauteed or as a salad after being briefly soaked in water. Since it loses texture when soaked for too long, immediately squeeze the water out after.

The main appeal of this week’s egg dish is the crispy texture of the dried radish strips. If you're cooking for children who find them hard to bite through, chop the radish strips into small pieces before cooking. Then fold the egg mixture like an omelet, and the dish is done.

Another virtue of dried food is the flavorful stock it releases. We were surprised when chef Katsuhiko Yoshida suggested turning the stock into a sauce to pour over the egg, but the sweet, thick sauce was certainly a perfect match for the omelet.

Dried foods are produced by draining vegetables or seaweed of water by laying them out to dry or exposing them to cold winds.

Dried foods are suited to Japan’s mostly mild climate, and appear even in the Edo Period (1603-1867) recipe books, according to Hiroyuki Shitomi, the president of Mantou, a Tokyo-based dried food wholesaler established in 1913.

As word of dried foods particular to Japan has spread, more foreign tourists have been turning up at Mantou, with many drawn by the foods' health benefits.

But the aging of the farmers and a decrease in the producers have halted production of some dried foods, making succession a major problem in the industry.

1. Place dried daikon strips and 300 ml water in plastic bag and leave for about 10 minutes (PHOTO A).

2. Squeeze out water from daikon strips and cut into 2-cm pieces (PHOTO B). Put aside water they were soaked in if you plan to make thick sauce in arranged version.

3. Pour oil in frying pan, place on low heat and stir-fry daikon strips. Once oil has coated the pieces, add sake, soy sauce, doubanjiang and cook further (PHOTO C). When all ingredients are mixed, the stir-fry is done. Use half the amount for omelet. Remainder may be kept in the fridge for 2 to 3 days.

4. In a bowl, add eggs, finely chopped green onion, sake, salt and white pepper and mix well. Pour oil in pan, place on high heat and raise oil temperature. Pour in egg mixture. Egg will rise in generous amount of oil. Place daikon strips in center and reduce to medium heat. Thoroughly spread out egg mixture that pools on surface to cover bottom of pan. Fold in half, cook the other side as well and it is done.

Add 100 ml water used to soak daikon strips, bit of salt, 1 tsp sake, bit of white pepper to the frying pan that was used to make the omelet and place on low heat.

Mix in slightly more than 1/2 tsp katakuriko starch with a little more than 1 tsp water. Add 30 grams shimeji mushrooms to pan and once it turns tender, add katakuriko mixture and bring to a boil.

When the sauce has thickened, turn off heat. Mix in 1/2 tsp sesame oil and pour over the omelet.

Daikon radish contains fructose, glucose and sucrose, which become concentrated when dried. When dried daikon strips are soaked in water, more than half of the sugars dissolve out after 30 minutes.

If this liquid is kept aside and used in simmered or other dishes, you can take advantage of the flavor and sugars of the dried daikon to use in other dishes.