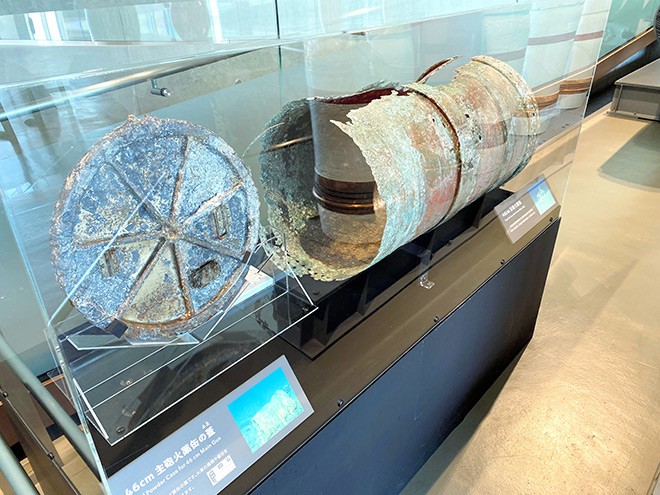 A powder cartridge used for the battleship Yamato’s main gun is added to the permanent exhibition at the Yamato Museum in Kure, Hiroshima Prefecture. (Yasuyuki Sasaki)

KURE, Hiroshima Prefecture--Six pieces recovered from the sunken battleship Yamato on the seabed were added in February to the permanent exhibition at the Kure Maritime Museum here, also known as the Yamato Museum.

The items, each of which has a high value as a historical material, were salvaged from the Yamato wreckage off the coast of Kagoshima Prefecture during a survey by a private company in 2016.

Museum officials plan to revise the exhibits, work with other museums and devise other measures to further increase the attractions of the museum ahead of April, when the institution marks its 15th anniversary.

The six items include a powder cartridge used for the Yamato’s main gun (about 50 centimeters in diameter and about 90 cm long), a rangefinder used to calculate the distance to a target and insulators attached to the antenna wire running on the battleship.

These were found from the Yamato, which was said to be the largest and most powerful battleship ever built. She was attacked by U.S. forces and sunk with her crew on April 25 during the Pacific War.

Osaka-based Fukada Salvage & Marine Works Co., which was commissioned by the Kure city government to conduct an undersea survey on the Yamato in May 2016, continued its own endeavor and retrieved 18 pieces. These were put on display at a special exhibition called “Sunken Warships--Battleships Yamato and Musashi,” which ran from April 2019 to January this year.

Of these, six pieces particularly highly evaluated by visitors were selected for the permanent exhibition.

The museum also replaced many of its documents and other materials from during and after the war to showcase about 30 new items for the permanent exhibition. They include fragments of a U.S. B-24 bomber called the Taroa, which attacked ships anchored at Kure and was shot down by the Japanese military in the closing days of the Pacific War in July 1945.

Also on display are items that symbolize the everyday lives of civilians during wartime, including a ceramic clothes iron and an "iroha-karuta" matching card game themed on patriotism, which are both featured in Fumiyo Kono's manga "In This Corner of the World" published by Futabasha Publishers Ltd.

The officials also renewed historical materials that show how the legacy of the old Kure Naval Arsenal laid the groundwork for the city's shipbuilding industry.

The Yamato Museum will mark its 15th anniversary on April 23.

City officials allocated about 17 million yen ($157,400) in the fiscal 2020 budget for a project to increase the public's interest in the institution. The officials will continue considering a large-scale remodeling project for the museum by re-evaluating its collection of more than 230,000 items and making other efforts, following suit with the previous project in fiscal 2019.

They also intend to organize exhibitions in collaboration with the ocean-themed Saka no Ue no Kumo Museum in Matsuyama and the Murakami Suigun Museum in Imabari, Ehime Prefecture, as well as hosting memorial symposiums, to bolster promotional efforts of the museum.