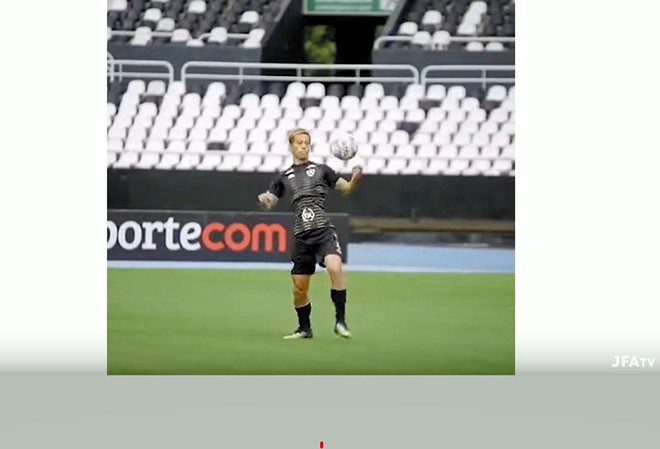 A video shows Keisuke Honda, who plays for Botafogo in Brazil, lifting a soccer ball. (Captured from JFATV)

For budding soccer players stuck at home while their schools are closed during the new coronavirus outbreak, "teachers" such as Keisuke Honda are passing "homework" to them.

In a one-minute video posted on YouTube, Honda keeps a soccer ball airborne using nifty acrobatic moves with his head, back and shoulders.

The video comes with a written message to children: “You must not lose to Honda who is not good at lifting!”

As the school shutdown to minimize the COVID-19 outbreak continues, Honda is among overseas Japanese soccer stars who are sending inspirational messages and assignments to children who are deprived of practicing and playing the sport.

In another video posted on YouTube, Maya Yoshida, the Japan national team captain who plays for Sampdoria in Italian Serie A, tells children that he has been forced into a similar predicament as their own.

Yoshida said all Serie A games have been canceled as Italy is going through a nightmare caused by the coronavirus pandemic, and it has been difficult for him to train with his club.

“But I want you to think of this as an opportunity to focus on overcoming your weaknesses and improving your individual skills,” Yoshida tells viewers.

Yuto Nagatomo, a standout player on the national team who currently plays for Turkish team Galatasaray, assigned children a different but vital task: “When you come home, wash your hands thoroughly and gargle.”

Other famed players such as Shinji Kagawa of Real Zaragoza in Spain, Makoto Hasebe of Eintracht Frankfurt in Germany’s Bundesliga and Shinji Okazaki of Huesca in Spain--all of whom played for Japan at the 2018 FIFA World Cup in Russia—have also posted video messages and training assignments for children.

The Japan Football Association came up with the idea of posting the free video series on JFATV, an official YouTube channel to encourage schoolchildren to stay healthy and active while schools are closed.

The JFA is expected to keep posting more videos from star players until April 5.

For videos by the JFA:
https://www.youtube.com/channel/UCgIeUSV91-FfmCayG4lSBcw