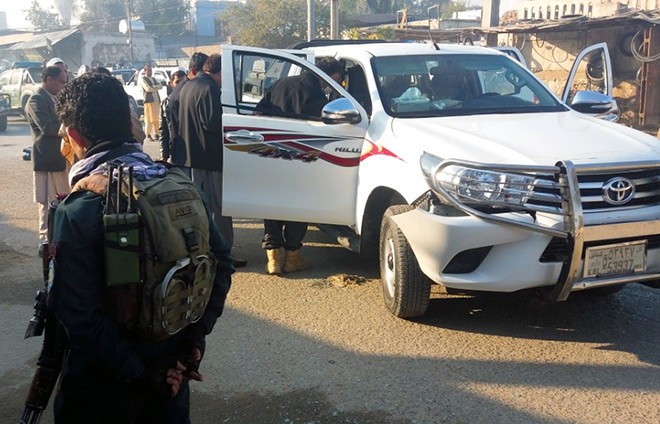 One of the vehicles that carried Tetsu Nakamura and five others on the morning of Dec. 4, 2019, when they were caught in a deadly ambush in Jalalabad, eastern Afghanistan. (Provided by a local resident)

BANGKOK--Two men arrested in connection with the slaying last year of famed Japanese doctor and humanitarian Tetsu Nakamura in Afghanistan apparently had nothing to do with the murder even though incriminating evidence was found in their homes, authorities in that country said.

Officials contacted by The Asahi Shimbun explained that investigating violent crimes in Afghanistan, a landlocked country locked in warfare for most of the past 40 years, is never easy.

Nakamura, then 73, a local representative of nonprofit group Peshawar-kai, based in Fukuoka, was caught in an ambush with his driver and four security guards while heading to an irrigation project in Jalalabad, eastern Afghanistan, on Dec. 4, 2019.

Afghan security forces arrested the two men within six days of the incident after discovering uniforms of security organizations and guns at their homes and elsewhere.

Armed assailants sometimes don the uniforms of security organizations as a disguise.

The two men vehemently denied having had anything to do with the slaying.

"No evidence of their involvement was found," an official told The Asahi Shimbun. "We should have not announced the arrests on the basis of our assumptions at so early a stage in the investigation."

In Afghanistan, it is common for arrests to be made purely on the basis of suspicion, after which the detainees are released for lack of evidence.

A source who knows one of the suspects said the man had not returned home as he was charged with possessing guns illegally.

Local police, as well as intelligence agencies, are continuing to investigate the incident. But no other arrests have been announced.