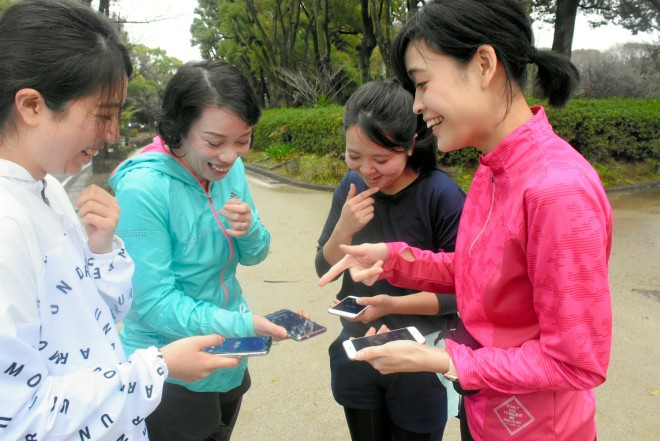 A group of women participate in the “Online Marathon” hosted by the organizer of the Nagoya Women’s Marathon 2020 and check an app to see if their running distance is recorded correctly in Nagoya’s Mizuho Ward on March 8. (Yoshinori Doi)

NAGOYA--Company employee Reiko Furuichi set off in the Nagoya Women’s Marathon 2020 but realized after running about 1.2 kilometers that there was a problem.

The app provided by race organizers showed that she had covered a distance of only 0.32 km.

“Is this working all right?” Furuichi, 45, asked her three friends running alongside her, looking confused.

Furuichi is among the women deprived of an opportunity to run in the Nagoya Women’s Marathon on March 8 here due to the risk of the spreading novel coronavirus.

About 24,000 people who had registered to run the marathon in the “general category” were excluded, unless they were in the "elite category."

The organizer then came up with an unusual, alternative way for them to run a marathon.

Participants are asked to download the special app to their smartphone and use a GPS function to measure the distance run to complete the 42.195 km.

When and where to run are up to the participants. Runners do not have to complete the full distance in one try. Multiple runs do count as long as a runner completes 42.195 km by May 31.

It is apparently the first time for a major domestic marathon to go “online.”

The organizer of Nagoya Women’s Marathon fired a virtual starter's gun to start the first-ever “Online Marathon” at 1 p.m. on March 8, shortly after its elite category race ended.

As soon as the special apps became available and activated to record, runners sprang into action on roads in rainy Nagoya.

APP ACTING UP? NO WORRIES

Meijo Park, which surrounds Nagoya Castle in the city, attracted some runners because there are very few hindrances such as traffic lights.

Furuichi was one of the runners who couldn’t wait to participate in the online marathon on the first day.

Furuichi met up with her three running mates, who are from Chita and Tokoname in Aichi Prefecture, to conquer the first 10 kilometers together that day.

“I was disappointed but understood,” Furuichi, who was looking forward to running the Nagoya marathon for the sixth time, said about the organizer’s decision to prohibit the public participation in the event.

Running an online marathon was a daring idea to her and she had been looking forward to it, Furuichi said.

Earlier that day, the four watched Mao Ichiyama, 22, winning the elite race with a new record in Japan, which ensured her a berth in the 2020 Tokyo Olympics.

“She was really awesome!” Furuichi said.

Ichiyama’s feat energized the four, who exchanged messages via a Line app, “Next up is us!” before meeting for the run.

Although Furuichi struggled with the app, the organizer has set a makeshift workaround for such an eventuality. It is allowing participants to self-report their accomplishment when they reach 42.195 km.

Furuichi encountered another problem. The group became bored with seeing the same scenery of the park over and over while running.

“Next time, we need to think about a running route,” she said.

An online marathon may be challenging and fulfilling, but it can’t replace the actual joy and rewards of running a marathon.

For the Nagoya Women’s Marathon, runners had an additional motivation to complete the 42.195-km course--a specially designed Tiffany pendant necklace.

Every year, those who complete the full marathon receive silver jewelry in a signature Tiffany blue box, handed by a man in a tuxedo.

“The runners don't sign up for the marathon just to run 42.195 km,” said Ikuko Naruo, 43, who manages a running school at Meijo Park, and had planned to run in the Nagoya event. “They did so because they wanted to race in an enthusiastic environment in front of cheering spectators and get a Tiffany."

The organizer has promised to present a Tiffany pendant to those finish an online marathon.

Naruo also pointed out that there are few options for runners to run a full 42.195 km safely in the city of Nagoya.

“I can only think of Meijo Park and Shonai Ryokuchi Park," she said. “To do that just in Meijo Park, you have to run more than 30 laps. Without rousing cheers from people on the streets, I have to say it’s nothing but an ascetic exercise.”

Chihoko Kikukawa, 56, started her online marathon at a little past 1 p.m. on the day.

Kikukawa, a resident of Okazaki in the prefecture, wanted to run the official route of the Nagoya marathon, starting and finishing at Nagoya Dome, which she was supposed to run, and complete a full marathon in one try.

Together with 11 of her fellow running team members, she ran on sidewalks along the route.

Because there were no security guards or staff who assist runners, Kikukawa and others raced carefully through the roads, obeying the traffic lights.

The group had to stop at traffic lights so often that they didn’t feel the pressure that comes when they aim to improve on their best times.

Kikukawa said she just wanted to find a sense of closure because, “I have prepared for this day.”

However, she learned that it was not that easy to complete a full marathon in one time. Kikukawa retired at around the 25-km mark. Frequent stops for traffic broke her stride and the rain cooled her body off.

“She was physically drained,” her running mate said.

Only four out of 11 who ran with Kikukawa reached the finish line at the Nagoya Dome after seven hours.

If there were cheering crowds to encourage them along the route, the runners wondered if the result would have been different.

For Kikukawa, a Tiffany pendant would have to wait until the next time.

Like many major city marathons, the Nagoya event has been very popular and prospective runners go through a highly competitive lottery to gain entry in the general category.

The entry fee for this year’s marathon was 14,600 yen ($137), including the processing fee. The fee will not be refunded even though the organizer called off the public portion of the event.

Some people have expressed frustration over the “online marathon” alternative.

“I would rather have a spot in the next marathon,” one of the online marathon participants said.

The organizer of the Tokyo Marathon also barred the general public from running in the March 1 event but offered a priority spot in next year’s marathon to those who had paid the entry fee.

(This article was written by Yoshinori Doi, Tomoaki Hosaka and Masahiro Iwao.)