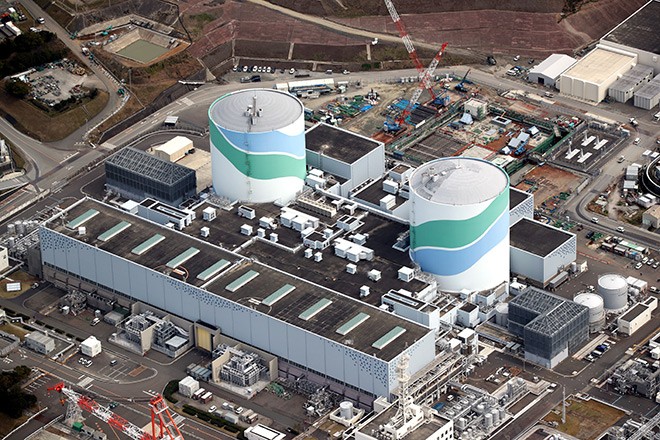 The No. 1 reactor at the Sendai nuclear plant of Kyushu Electric Power Co. stands to the right in the background next to the No. 2 reactor. (Eiji Hori)

The Nuclear Regulation Authority not only shut down a nuclear reactor over safety standards, but it also sent a message to utilities that they can expect no more leeway concerning required anti-terrorism measures.

The stricter stance of the NRA will likely further increase the costs incurred by electric power companies seeking to continue operating their reactors.

The Sendai nuclear plant in Kagoshima Prefecture operated by Kyushu Electric Power Co. went offline on March 16 because it failed to meet a March 17 deadline to complete construction of anti-terror facilities. It was the first reactor shut down for this reason.

Previously, utilities could continue operating nuclear plants as long as they were taking measures to meet the new safety standards that were set in 2013 following the nuclear disaster in Fukushima Prefecture.

But the NRA also implemented a “backfit” provision that year to allow it to force electric power companies to halt nuclear reactors that did not meet the latest standards.

The initial deadline for constructing anti-terror facilities was July 2018, five years after the tougher safety standards took effect. Utilities pleaded for an extension of that deadline, saying they already had their hands full meeting other stricter standards required to resume operations at their nuclear plants.

The NRA changed its stance and said the new deadline for the anti-terror facilities would be five years after approval of construction plans to upgrade safety standards at the plants.

But even that extension left the utilities with little time to complete the anti-terrorism facilities, and they asked for another extension.

NRA Chairman Toyoshi Fuketa scolded the utilities, saying they should drop the idea that they will get their way as long as they put in requests. The NRA also criticized the utilities’ overly optimistic timetables for the construction work and their stance of seeking help from the central government instead of doing what needs to be done.

The anti-terror requirement places a huge economic burden on electric power companies because they are required, in a sense, to set up another central command center to remotely control the nuclear reactors in the event of a terrorist attack.

Constructing one anti-terror facility can cost from about 50 billion yen ($468 million) to 120 billion yen. Those figures are between two and five times the initial estimates.

The latest shutdown is especially painful for Kyushu Electric because it depends on the operation of all four of its nuclear reactors to turn a profit.

At one time, Kyushu Electric recorded a net loss, spurring it to move ahead of other utilities to work on restarting its reactors.

In 2018, the company finally achieved its goal of having all four reactors back online, and its profitability improved. But the shutdown of the Sendai No. 1 reactor will likely be followed by taking the No. 2 reactor offline in May because its anti-terror facility is not complete either.

Utilities will have to pay additional fuel costs to run their coal-fired thermal plants to make up for the loss of power with the shutdowns of their nuclear reactors.

In the case of Kyushu Electric, that means 4 billion yen a month for each thermal plant it operates.

There is more bad news on the horizon for the utilities because the NRA plans to review its anti-quake regulations this spring based on new calculations for estimated ground motion during earthquakes. That will likely affect not only the Sendai plant, but also the Genkai nuclear plant operated by Kyushu Electric in Saga Prefecture.

The backfitting provision will apply to possible additional construction work to meet those anti-seismic standards.

“While we will do everything to improve safety, the deadline for meeting those new standards should be set in a cautious manner,” a Kyushu Electric executive. “We will be forced to argue that a deadline is impossible if we feel we cannot meet it.”

(This article was written by Keitaro Fukuchi, Yasuyuki Onaya and Daisuke Ikuta.)