Survey: 63% of Japanese say Olympics should be postponed 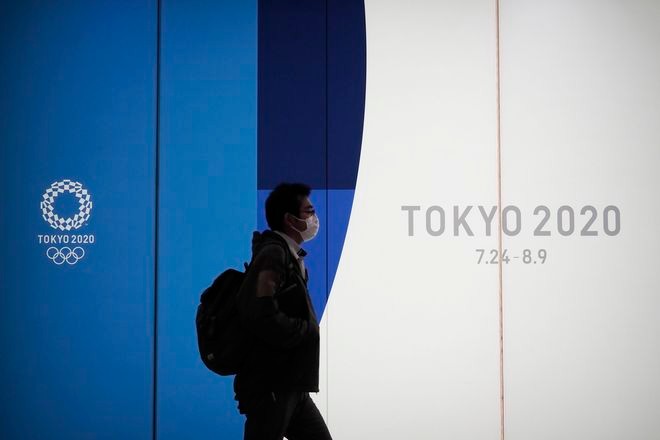 A man walks past a large display promoting the Tokyo 2020 Olympics in Tokyo on March 13. (AP Photo)

Sixty-three percent of voters think Japan should postpone the Olympics because of the novel coronavirus pandemic, compared with 23 percent who say the event should be held as scheduled, an Asahi Shimbun survey showed.

Nine percent feel the Tokyo Summer Games should be canceled, according to the telephone survey conducted on voters nationwide on March 14 and 15.

Even among residents in the host capital, 67 percent chose “postponement” and 21 percent picked “held as scheduled.”

Prime Minister Shinzo Abe has announced a number of measures and requests of the public to help prevent the spread of the virus that causes the potentially fatal COVID-19 disease. But he has said that the Olympics would go ahead as planned.

According to the survey, 41 percent of respondents approve of the Abe Cabinet, up from 39 percent in the previous survey conducted in February, while the disapproval rate dropped from 40 percent to 38 percent.

The respondents were evenly split on the government’s response to the new coronavirus outbreak so far, with “high evaluation” and “low evaluation” picked by 41 percent each.

The percentage of respondents who gave high marks for the government’s response was only 34 percent in the February survey.

On the government’s decision in March to impose entry restrictions on visitors from all areas of China and South Korea, 64 percent of respondents said the timing was “inappropriate,” while 26 percent said it was “appropriate.”

The spread of the virus has caused panic-buying and stockpiling, leading to shortages of face masks for sale. Two-thirds of respondents in the survey said government efforts to deal with the shortages are “insufficient,” compared with 21 percent who say they are “sufficient.”

The respondents were also asked about whether the outbreak is causing anxieties over their household budgets.

Forty-six percent of respondents said they are feeling anxieties that their daily lives will become worse, while 52 percent said they are not.

By occupation, 55 percent of self-employed people and 53 percent of workers in the manufacturing or services industries are feeling stressed over the new difficulties, the survey showed.

On Abe’s recommendation, sporting and cultural events, including the National High School Baseball Invitational Tournament, have been called off.

Seventy-eight percent of respondents said such measures were “appropriate,” while 15 percent said they were “inappropriate.”

The survey was conducted among eligible voters nationwide through phone numbers randomly selected by computer.

For landlines, the survey received 1,170 responses, or 53 percent, of the 2,192 households with an eligible voter contacted.