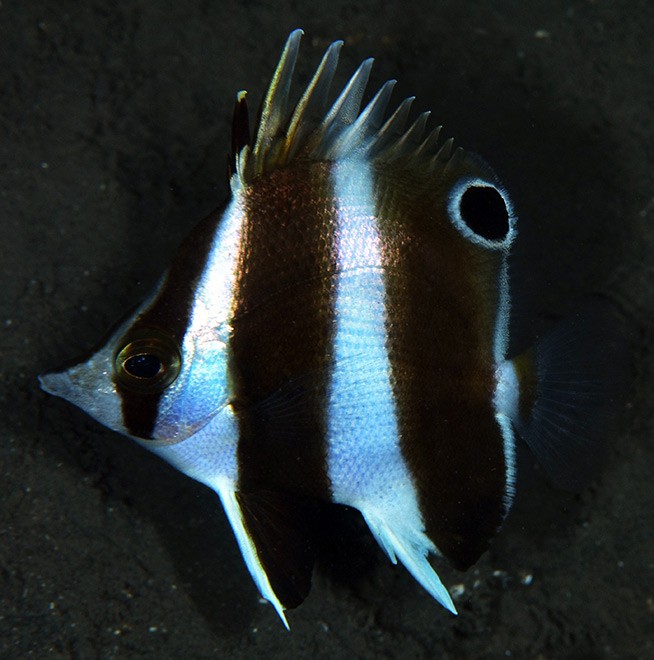 The "panda genrokudai" (panda butterflyfish) has been confirmed to be a previously unknown species. (Provided by Shinichi Dewa)

KAGOSHIMA--The mystery of the identity of an unusual fish caught on a photograph swimming off the Izu Peninusula that baffled scientists for six years has now been cracked.

A team of researchers here primarily from Kagoshima University confirmed it is a previously unknown species.

They have named the fish "panda genrokudai" (panda butterflyfish) after its black-and-white striped body pattern that resembles the animal.

The researchers announced the discovery of the species inhabiting waters in Kagoshima Bay and off the Izu Peninsula in Shizuoka Prefecture on the online English edition of Ichthyological Research, a journal issued by the Ichthyological Society of Japan.

Measuring less than 10 centimeters long, the new variety bears resemblances to the brown-banded butterflyfish, known for its yellow and white stripes.

The team said why the panda butterflyfish sports a less colorful skin is apparently related to the deeper waters it inhabits.

"The yellow body of the brown-banded butterflyfish is important for them to identify each other, as it lives in shallow, bright waters," explained team member Hiroyuki Motomura, a professor of fish taxonomy at the university.

The investigation into the fish began after a team member found a photo taken off the Izu Peninsula of a black-and-white marine creature resembling the known butterflyfish in the image archives of the Kanagawa Prefectural Museum of Natural History.

The team said its research showed that the fish also inhabits the East China Sea and waters off the Philippines.

Though most butterflyfish species live in coral reefs and other shallow waters, the panda-like fish turns out to be native to rocky areas 40 to 160 meters below the surface.

During their research, the scientists examined specimens from both Japan and abroad, comparing traits such as the shape and color of the fish's long snout with other specimens.

The team rewarded one devoted member of the project by incorporating her surname into the official scientific name for the new species.

The new Roa haraguchiae was named after Yuriko Haraguchi, a volunteer staff member at the Kagoshima University Museum.

Haraguchi has helped the museum for 15 years to create and sort out one of the largest academic specimen collections in Asia, which comprises 200,000 fish samples, 200,000 images and 50,000 DNA specimens.

"We decided the variant's name in recognition of her years-long contribution," Motomura said. "She has played a core role in assembling specimens since the volunteer staff system was introduced and is engaged in preparation of the new species’ specimens."