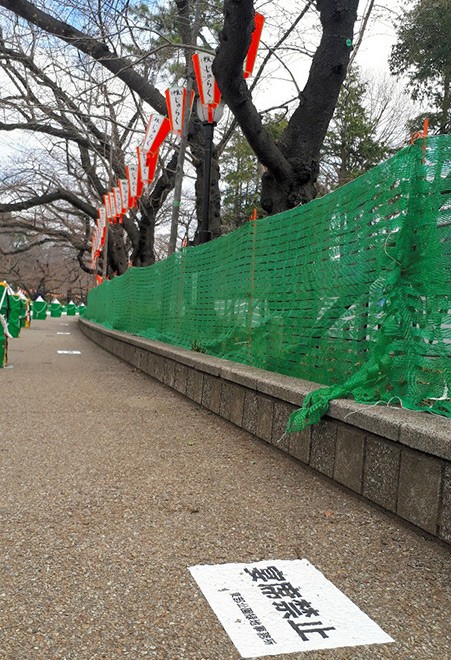 Though cherry blossoms in the capital were officially declared to be blooming on March 14, an advisory by the Tokyo metropolitan government to refrain from gathering in large groups has dampened plans for “hanami,” or flower viewing events.

The March 4 announcement asked Tokyo residents not to gather under cherry trees in parks and along rivers with food and drink to celebrate the coming of spring as in past years.

At least 10 events related to cherry blossoms have been canceled this year out of concern for the ongoing coronavirus outbreak, metropolitan government officials said.

Paper lanterns are hung to decorate the park and illuminated between 5 p.m. and 8 p.m., but this year’s event has been scrapped and park officials have not set up special areas for party-goers.

The illumination of cherry trees at the Rikugien Gardens, also in Bunkyo Ward, that was to have been held between March 20 and April 2 has also been canceled.

A cherry blossom event at Yasukuni Shrine in Chiyoda Ward that features 70 or so food stalls has also been called off. About half a million people usually turn up for it.

A nighttime Noh performance and a sumo tournament on shrine grounds have also been canceled.

In the past, visitors to Kitanomaru Garden near the Imperial Palace during hanami were allowed to party on the lawn, but park officials posted an announcement on their website asking visitors not to do so this year. Park officials patrolling the grounds will ask those holding parties to leave.

Family picnics were not included in the advisory to avoid public gatherings, metropolitan government officials added.

The announcement was to warn people that gathering under cherry trees in large groups seated close together, sharing food with the same chopsticks and drinking out of the same cup or bottle should be avoided as they risk spreading the coronavirus.

There are also no restrictions against restaurants providing special services to those wanting to take in cherry blossoms.

An Italian restaurant in Meguro Ward offers a special course from mid-March until early April where customers can dine while viewing cherry blossoms through the windows.

Hanami season reservations remain close to those of an average year, a representative of the restaurant said, saying that most are from regular customers.

“There are likely some customers who want to view the cherry blossoms while enjoying a leisurely meal,” one restaurant staff member said.

Other people in the capital offered their own ideas on how to enjoy this year’s cherry blossoms amid the coronavirus.

“Cherry trees are planted in many different places. I suggest walking around in search of them,” said graphic designer Yasuwo Miyamura, 46.

Rather than holding large parties under the trees, this year might be an opportunity to return to the roots of hanami and simply enjoy the flowers, whether they be in smaller parks or around schools, Miyamura said.

Cherry blossoms in Tokyo will reach full bloom on March 23, according to a Japan Weather Association forecast.

(This article was written by Hikari Maruyama, Yusuke Nagano and Kayoko Sekiguchi.)