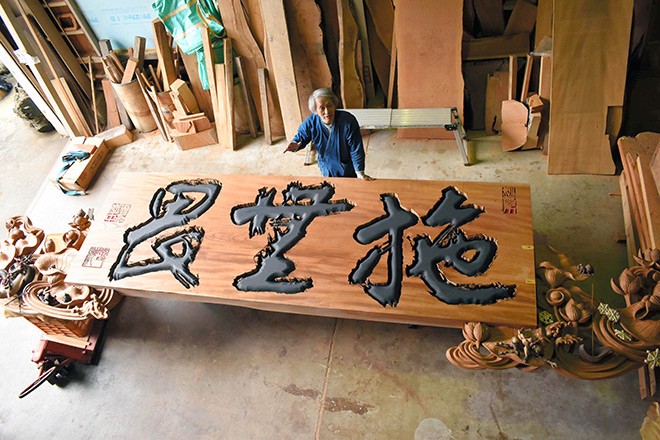 NANTO, Toyama Prefecture--Artisans here have nearly completed a 660-kilogram wooden framed motto of Sensoji temple in Tokyo that resembles the one that was incinerated in the U.S. firebombing raids in World War II.

A replica has adorned the main hall of the temple, but the new “hengaku” being produced contains carvings that are more similar to those of the original.

The project has entered the homestretch, and the new sign is expected to be delivered to the temple in or around May.

Nanbu Hakuun III, 68, an artisan who specializes in the traditional techniques of Inami wood carving, was entrusted with the important work.

At a studio in Tonami in western Toyama Prefecture, he has been working on a sign that is about 6.3 meters wide, 1.6 meters high and 15 centimeters thick.

Nanbu’s carvings in the framed motto express the meanings of the Buddhist word “semui.” Consisting of three kanji characters, it proclaims the power of Sensoji’s main deity, the Goddess of Kannon, to free visitors from their fears and anxieties.

The base of the frame features white lotus flowers that bloom even in muddy swamps. Above them, Nanbu has included a hungry ghost to express evil minds, a catfish representing disasters and a “kabuto” samurai helmet to symbolize conflict to show how people’s anxieties are purified.

The lotus flowers are carved from hinoki cypress. But for the other carvings laid over the flowers, Nanbu opted to use about 15 different types of wood, including walnut and cherry.

“I hope it will be an opportunity for people to learn about the profundity of the works of Japanese artisans and also the fun of our culture in which we can do many things using wood,” Nanbu said.

About 10 other artisans, including an engraver, a carpenter and a gilder, are working on the sign.

The original hengaku frame, which was destroyed in the Great Tokyo Air Raid on March 10, 1945, was enshrined at Sensoji in 1727. The main hall was rebuilt in 1958, but the idea of creating a new sign was abandoned due to a shortage of funds.

The current replica was copied from a photograph of the original.

Senior priest Yujun Moriyama, 66, said that getting a new hengaku has been a “pending matter” since the main hall was rebuilt.

Moriyama visited the Kannondo hall in Tonami in July 2018. Legend has it that the hall is associated with the statue of the Goddess of Kannon at Sensoji. He also traveled to the neighboring city of Nanto, where he met Nanbu and was deeply moved by the high-quality techniques of Inami wood carving.

The priest then asked Nanbu to redo the sign at Sensoji temple.