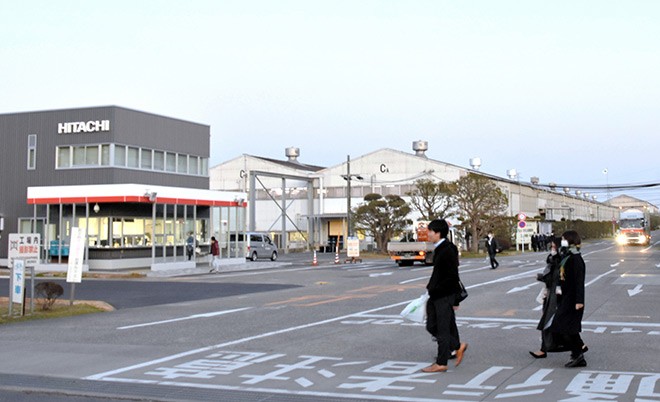 Employees of Hitachi Ltd.’s Mito office in Hitachinaka, Ibaraki Prefecture, leave for home after learning March 17 that a colleague was infected with the new coronavirus. (Takaya Katada)

Governor Kazuhiko Oigawa urged people not to panic over the announcement by prefectural authorities on March 17.

“Few people had direct contact with the infected man, so residents should deal calmly with the matter,” Oigawa said at a news conference.

The employee, who is in his 30s and works for Hitachi’s Mito office in Hitachinaka, traveled to Italy from Feb. 24 to 27 for business, the prefectural office said.

On March 18, Hitachi temporarily closed the building where the man works and instructed its 1,000 or so employees there to stay home until March 25, marking the end of a 14-day period from March 12, which was the next day of the victim's last working day.

The Hitachi employee, who lives in Hitachinaka, traveled to Toscana, an epicenter of the outbreak, with two colleagues, according to the prefectural government.

He returned to Japan on Feb. 28, landing at Tokyo's Haneda Airport, and stayed at home until March 1.

The man didn’t display any symptoms and went to work on foot wearing a face mask from March 2 to 5.

On March 5 he had developed a fever and took the next day off work.

After confirming he was free of fever, he went to his office from March 9 to March 11.

But on March 12, he experienced a fever of between 37 degrees and 37.9 degrees, and took the day off.

The man's family contacted a public health center after he displayed such symptoms as a raging headache and a cough.

He then visited a clinic set up for people who had returned from overseas and who had contact with people infected with the coronavirus.

He tested positive on March 17 after taking a polymerase chain reaction (PCR) test.

The man is now being treated at a hospital in the prefecture. Though he still experiences coughing and headaches, he is in stable condition and his temperature is down to 36 degrees.

The prefectural government has asked the two Hitachi employees who traveled with him to Italy to take PCR tests and stay at home. The two also reside in Hitachinaka.

The government also asked the infected man's family members to take PCR tests. The man and his wife, who is in her 30s, have a child of kindergarten age and a 1-year-old child.

The kindergarten the child attended has been closed since March 6 in line with nationwide measures requested by Prime Minister Shinzo Abe that saw most education facilities nationwide temporarily shuttered.

In response to the infection in Ibaraki, prefectural authorities held a meeting March 17 to discuss steps to contain the spread of the virus.

“Our priority is to prevent a cluster infection by thoroughly tracing people who had close contact with the infected man,” Oikawa said.