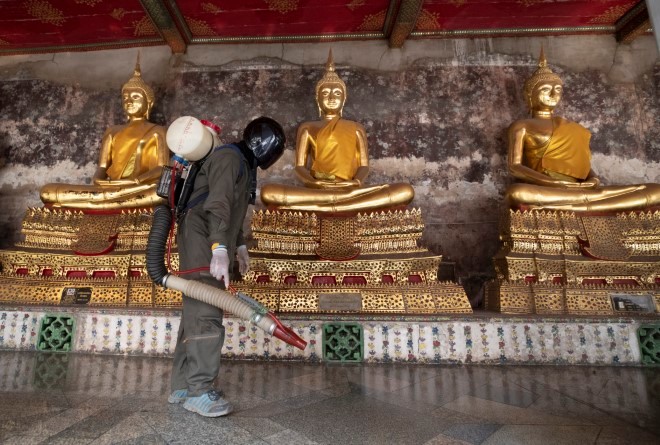 A worker sprays disinfectant at the base of Buddha statues as a precaution against the new coronavirus at Wat Suthat temple in Bangkok on March 17. (AP Photo)

BANGKOK--Thailand’s government has enacted stronger measures to combat the spread of the coronavirus, including postponing the country’s biggest holiday, shutting down schools and closing bars.

The restrictions are not as sweeping as in many other countries, where businesses have been shut and people have been urged or forced to stay at home.

In a televised speech Tuesday, Prime Minister Prayuth Chan-ocha sought to reassure citizens that for now, fighting the virus does not mean closing down the country.

The measures were approved in a Cabinet meeting at which all attendees wore face masks and sat 1 meter apart, as recommended by health experts.

The plan to postpone Songkran--the annual three-day traditional New Year’s holiday in April--is one of a number of measures to discourage the gathering and movement of large numbers of people. Millions of Thais normally travel from the cities to their hometowns to celebrate the holiday, which will be rescheduled at a later date.

All public and private educational institutions will be closed starting Wednesday until further notice, the Ministry of Education said.

Gathering places such as bars, karaoke parlors, movie theaters, gymnasiums, boxing stadiums and other sports venues will be subject to closure as ordered by provincial governors. Such venues in Bangkok will also close for two weeks beginning Wednesday.

The closing of restaurants and malls in Bangkok will be at the discretion of its governor. Meanwhile, restaurants are required to implement strict disinfection procedures and health safety measures. Several in Bangkok have already halted table service and are only providing takeout and delivery.

The governors of two provinces, Buriram in the northeast and Uthai Thani in the north, have already regulated travelers with health checks and banned gatherings of more than 50 people.

While the new coronavirus can be deadly, particularly for the elderly and people with other health problems, for most people it causes only mild or moderate symptoms, such as fever and cough. Some feel no symptoms at all and the vast majority of people recover.

Arrivals from those areas must have health certificates issued no more than three days before boarding along with health insurance and must download cellphone applications developed by the government to keep track of them and their health in Thailand.

Under plans apparently not yet implemented, they would also be required to self-isolate for 14 days after arrival.

Officials have spoken of applying the same rules to people coming from any country with ongoing local transmission of the virus, but have not clarified when or how that would be implemented. They earlier indicated that rule could apply to the United States, Japan and several European nations.

Thailand’s huge tourism sector is taking a major blow from the COVID-19 outbreak. It accounted for 15.5 percent of total employment--5.8 million jobs--in 2017, according to a report by Bangkok Bank.

The government said it would reduce the price of public utilities including water and electricity by 3 percent to help people and businesses suffering financially.

“Under the current circumstances, prevention and protection measures against COVID-19 are the first priority of Thailand,” Deputy Prime Minister Wissanu Krea-ngam said Monday when he announced many of the measures proposed to fight the outbreak.

“The effects on the economy, tourism, exports and trade come second,” he said. “We don’t know yet how serious this battle will be. We are putting in everything to deal with it and then later we will come up with an economic rehabilitation plan.”

Thailand, the first country outside China to confirm a new coronavirus case, reported 30 new cases on Tuesday, bringing its total to 177.