Contaminated waste bags still at risk of loss in Fukushima 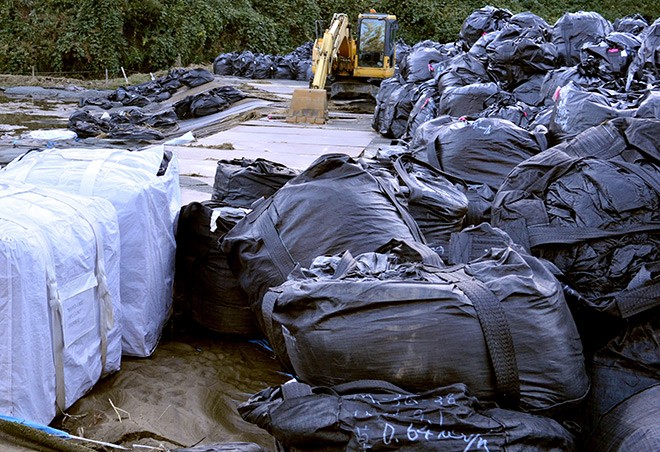 A temporary site where bags filled with contaminated waste from the Fukushima nuclear accident were swept away during Typhoon No. 19 in Tamura, Fukushima Prefecture, in October 2019. (Asahi Shimbun file photo)

The Environment Agency expressed fears the approaching rainy season could jeopardize the safekeeping of piles of contaminated waste collected after the 2011 nuclear disaster.

It said March 17 there was a risk of bulk plastic bags stored at 12 temporary sites in six municipalities in Fukushima Prefecture being swept away through the erosion of riverbanks caused by flooding, as well as mudslides and landslides triggered by torrential rains.

Officials are desperate to prevent a repeat of what happened last October when Typhoon No. 19 swept hundreds of bags into a river.

The ministry said its preventive measures will include transporting stockpiles to other temporary storage facilities and fencing in sites before the rainy season starts in May.

Officials initially refused to release the locations of the sites and the names of municipalities on grounds that doing so could seriously impair the reputation of those areas. But they relented several hours later after news organizations pressed the issue.

Fukushima Prefecture has 721 temporary sites. The ministry said one site managed by the central government and 11 that are under the jurisdiction of municipal governments face the risk of runoff and are in need of preventive measures.

The 12 sites at risk are: one in Namie managed by the central government; four in Kawauchi; two each in Iwaki, Nihonmatsu and Date; and one in Kawamata.

The ministry said it will discuss the best way to deal with the risk after considering role-sharing with municipal authorities and listening to experts’ opinions.