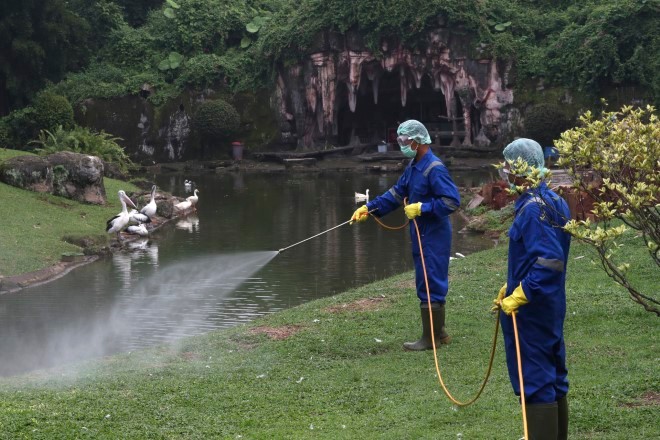 A worker sprays disinfectant at a pelican enclosure at a reptile park that is closed to the public amid the coronavirus outbreak, in Jakarta on March 18. (AP Photo)

JAKARTA--A rally of Muslim pilgrims that is drawing thousands of people to Indonesia has been stopped amid fears that it could help spread the new coronavirus, an official said.

For days, authorities had been trying to persuade Ijtima Asia, part of the global Tablighi Jama’at movement of evangelical Muslims, to halt the event at Gowa near the city of Makassar in South Sulawesi province after a similar event in Malaysia led to hundreds of infections.

He added that the pilgrims already there would be isolated while they make arrangements to leave Gowa. More than 8,500 people from across Indonesia, Asia and the Middle East had converged on the town.

The proselytizing Tablighi Jama’at movement behind the gathering in Indonesia hosted an event in Malaysia from Feb. 27 to March 1 that drew 16,000 followers and led to more than 500 coronavirus infections.

Photos and videos of the Indonesian gathering posted on social media showed huge crowds of men sitting tightly together in a huge tent.

“We are more afraid of God,” one of the organizers, Mustari Bahranuddin, told Reuters on Wednesday, when asked about the risk of participants spreading the virus at the event in Gowa.

“Because everyone’s human, we fear illnesses, death,” he said. “But there’s something more to the body, which is our soul.”