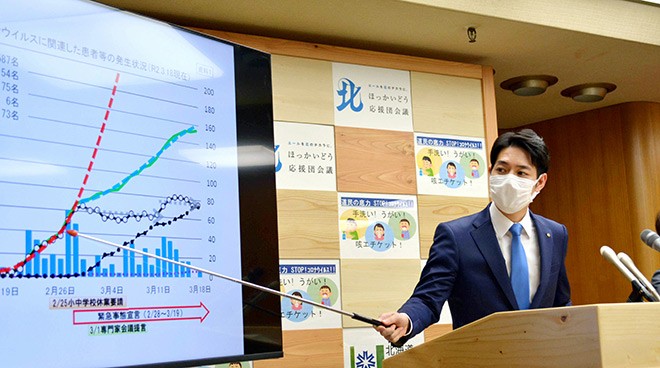 Hokkaido Governor Naomichi Suzuki uses a chart to show the number of novel coronavirus infections on the island has declined at a news conference at the Hokkaido government office building on March 18. (Toru Saito)

SAPPORO--The governor of Hokkaido plans to lift the state of emergency on March 19, but he urged residents to remain indoors over the weekend to protect against novel coronavirus infection.

Naomichi Suzuki announced the decision at a March 18 meeting held to discuss measures against the virus at the Hokkaido government office building.

The governor declared the state of emergency for the northern main island on Feb. 28, calling on residents to refrain from congregating in large groups and going out on weekends.

He said the state of emergency would remain in place for three weeks until March 19.

Although the measures have no legal basis, residents apparently took them seriously.

The number of new confirmed infections in Hokkaido has decreased since the peak at the end of February, when up to 15 new coronavirus cases a day were reported. The island reported no new cases on March 17 for the first time in about a month.

However, two small infection clusters have been confirmed in Hokkaido.

The governor again called on residents to remain indoors during the three-day weekend from March 20.

Suzuki decided that it was necessary to ask residents to avoid going out for the fourth straight weekend, given that infections might be still spreading mainly in Sapporo, the capital of Hokkaido.