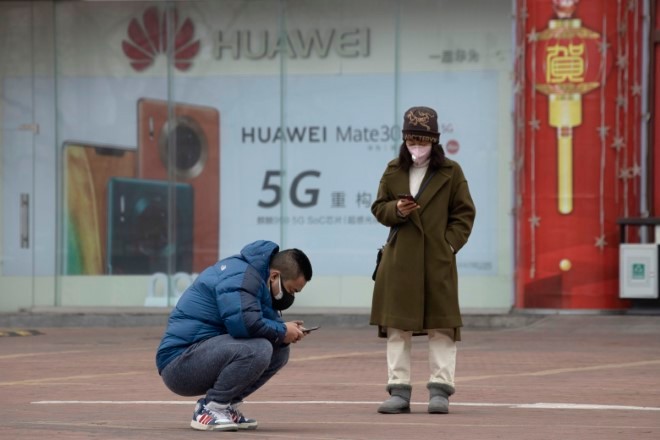 Residents wearing masks look at their smartphones near an advertisement for 5G smartphones from Chinese tech giant Huawei in Beijing on March 8. (AP Photo)

BEIJING--Factories in China, struggling to reopen after the coronavirus shut down the economy, face a new threat from U.S. anti-disease controls that might disrupt the flow of microchips and other components they need.

The shock threatens to set back the ruling Communist Party’s efforts to revive the world’s second-largest economy after it declared victory over the outbreak. It would add to pressures on global business activity as Western countries close workplaces, limit travel and tell consumers to stay home.

Chinese manufacturers assemble more than 80 percent of smartphones for Apple, Samsung and other brands, half of the world’s personal computers and a big share of home appliances and other goods. But they need U.S. processor chips and other high-value components.

It isn’t clear how U.S. anti-coronavirus curbs might affect trade. Controls so far apply to travelers, not goods. American factories are operating, but the National Federation of Independent Business says 39 percent of 300 companies it surveyed already were suffering supply disruptions.

“A sustained disruption of activity in the U.S. will likely lead to disruptions to manufacturing activity in China,” said Darren Tay, a country risk analyst for Fitch Solutions, in an email.

Beijing is easing controls that left city streets empty and silent and sent shock waves through the global economy. Manufacturers are rebuilding supply chains--networks of thousands of providers of auto parts, microchips and other components.

Officials say steel makers and other state-owned industries are almost back to normal. But conditions are more precarious for small, private companies that are China’s economic engine and make clothes, toys and other consumer goods. Many are running at a fraction of normal levels or are closed due to a lack of materials and employees.

One in six companies that responded to a March 9-14 survey has run out of components and others are running low, the American Chamber of Commerce in South China said in a report Wednesday.

The United States, Europe and other Asian countries accounted for 18 percent of shortages, the chamber said. It said supply chains from the United States are suffering the second-biggest disruption after those in China.

Just over half the 237 companies surveyed were American and three-quarters were manufacturers. All reported “some impact” due to supply disruptions due to the outbreak.

“Many of the companies reported a great deal of their needed items regularly being shipped from Japan, South Korea, Italy and the U.S.--countries which are now under pressure from the outbreak,” said the chamber report.

Economists who have slashed forecasts of this year’s global economic growth cite disruption to Chinese and U.S. manufacturing as one reason.

The predicament highlights the risks of manufacturing strategies that cut costs by using far-flung networks of suppliers and factories across multiple countries.

Smartphone brands likely will be hard-hit due to their reliance on Chinese assembly and fragmented groups of components suppliers, according to IDC.

Germany, Japan and South Korea also supply microprocessors and other smartphone components, but the most advanced chip producers are American.

“The pessimistic scenario sees supply disruptions lingering throughout the year,” IDC researchers said in a report. If that happens, “the industry is permanently reshaped” once it starts to recover next year or in 2022.

Huawei Technologies Ltd., a Chinese maker of smartphones and network equipment, has said it expects no change in its supply chain in the next three to six months. The company scrambled to remove American components from its products last year after U.S. President Donald Trump imposed curbs on access to U.S. technology.

Automakers also are “highly exposed,” because they need components from U.S. and other global suppliers, Moody’s Investors Service said in a report. It said disruption in China would affect the worldwide industry.

Global automakers use lean systems that keep few components on hand. They have reopened factories in China but say the pace of recovery depends on how fast suppliers start delivering again.

Ford Motor Co. said in a statement is “carefully assessing the situation” but anticipates no disruption to its China operations due to anti-virus controls imposed by other governments. It said its factories are able to meet market demand but need time to return to normal.

Dell Technologies Ltd., one of the biggest PC manufacturers, said it uses a global network of suppliers and tells customers about changes in production time.

“We continuously explore alternative sourcing, production and logistics strategies” and will “adjust as needed,” the company said in a statement.

The politics of supply chains are increasingly fraught as U.S.-Chinese trade tensions rise.

Manufacturers already were looking for ways to rely less on China after a tariff war with Washington blew up in 2018. But few countries can match its vast workforce, efficient suppliers and brand-new ports and other infrastructure.

Peter Navarro, a Trump adviser on trade, has called for Washington to rely less on Chinese-supplied components for medical equipment and raw materials for pharmaceuticals.

In addition to its workforce and rising skills, China is a leader along with the United States in embracing digital technology to make its supply chains even more competitive, Mattios said.

“Right now, most people would think companies are quickly leaving China,” he said. “The reality is, that is very difficult.”

Companies including South Korea’s Samsung Electronics have shifted some production to Vietnam to cut labor costs. But Vietnam’s population of 90 million people is smaller than that of the single Chinese province of Guangdong, the country’s manufacturing heartland, which has 100 million.

Vietnam’s ports, airports and other infrastructure are straining to keep up with growing trade.

“I think China, even after this Covid, will still have a major competitive advantage,” said Mattios.

China’s government wants to shut down talk about companies leaving.

“It is neither realistic nor wise to try to artificially cut off the global industrial chain and supply chain,” a foreign ministry spokesman, Geng Shuang, said Tuesday. “Given the current epidemic situation, it is simply the wrong medicine.”