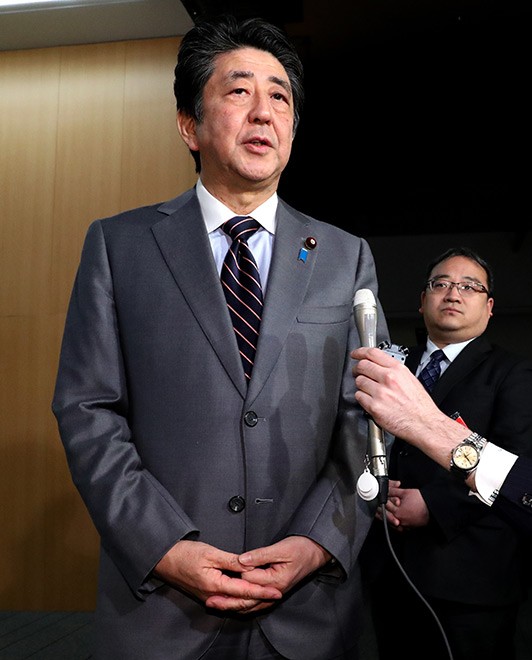 Government and ruling party officials brushed aside a lawsuit that is demanding a further investigation into falsified documents related to the Moritomo Gakuen scandal that led to the suicide of a Finance Ministry official.

The lawsuit was filed on March 18 at the Osaka District Court by the widow of the lower-ranking official, Toshio Akagi, who was apparently forced to falsify the documents.

The plaintiff is seeking about 112 million yen ($1 million) in compensation from the central government and Nobuhisa Sagawa, who was director-general of the Financial Bureau when the falsifications took place.

The lawsuit, claiming that Sagawa ordered the altering of the public documents, is demanding an explanation for why he gave those instructions to the Kinki Local Finance Bureau where Akagi worked and who told Sagawa to do so.

Asked about the lawsuit on March 19, Finance Minister Taro Aso said he could not comment since he had not read the actual litigation. He added that the ministry would not conduct another investigation into the matter.

The Finance Ministry released the results of its investigation in June 2018, which only stated that while Sagawa set the overall direction for the falsifications, no specific orders or instructions could be linked to him.

The lawsuit mentions that the falsifications were ordered after Prime Minister Shinzo Abe in February 2017 promised to resign as prime minister and as a Diet member if it turned out either he or his wife, Akie, were involved in the sale at a steep discount of state-owned land to Moritomo Gakuen, a private school operator.

The opposition parties on March 18 set up a task force to look further into the claims in Akagi’s notes that Sagawa gave the instruction to falsify documents related to the sale of the land. The opposition plans to call Sagawa before the Diet for questioning.

Akagi was 54 when he committed suicide in March 2018, five days after the falsifications came to light. According to his notes and his widow, he became suicidal when he believed that he would be held responsible for the falsified documents, despite his objections to Sagawa’s orders.

Lawyers for his widow released those notes during a news conference on March 18 to explain the lawsuit.

In the March 18 Upper House Financial Affairs Committee session, Eiji Chatani, the director-general of the Minister’s Secretariat at the Finance Ministry, was asked about the notes and will left behind by Akagi.

Chatani said he first learned about the notes through news reports. He also said the ministry had no intention of conducting another investigation.

A high-ranking Upper House lawmaker of the ruling Liberal Democratic Party said about the notes, “No new facts were contained in it.”

Another LDP Upper House member said the government should ignore calls for another investigation, pointing out that Finance Ministry officials had already been disciplined after the release of the June 2018 investigation report.

But other ruling coalition lawmakers had a different view, especially in light of recent revelations that public documents related to the annual cherry blossom viewing parties hosted by Abe had also been discarded.

“The Abe administration has been criticized as having a tendency to cover up inconvenient matters,” a deputy secretary-general of the LDP said. “The latest development could lead the public to think there is some truth to that criticism.”

Noritoshi Ishida, the policy chief of junior coalition partner Komeito, said on March 18: “My honest opinion is that this is a very serious matter since it involved someone taking his own life. Discussion in the Diet will likely center on consistency between (what was contained in the notes) and past Diet responses by those involved.”

The opposition has repeatedly said that Abe’s statement about resigning was the catalyst that led Finance Ministry officials to falsify documents.

Hiroshi Kawauchi, a Lower House member of the Constitutional Democratic Party of Japan who will head the opposition task force, said, “The starting point for what was revealed in the notes is the prime minister’s response in the Diet. We cannot help but say that all responsibility lies with the prime minister.”

When asked by reporters on March 18 about the notes, Abe only offered his condolences to the bereaved family and said that document falsification should never be repeated. He ignored questions about his own responsibility in the matter.

(This article was written by Dai Nagata and Daizo Teramoto.)

Here’s How Wuhan Tested 6.5 Million for Coronavirus in Days