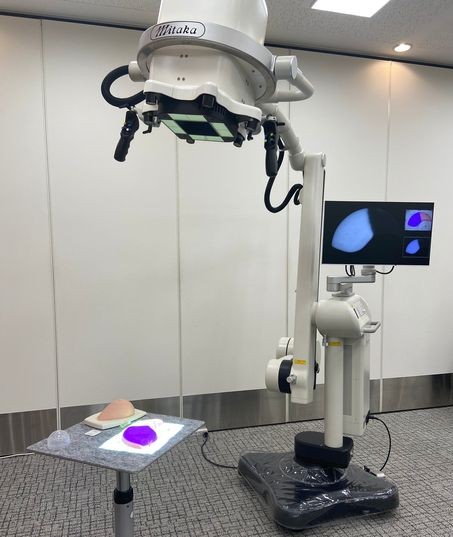 Projection mapping technology displays images on the patient’s body through the projector at the tip of its arm. (Masatoshi Toda)

Hailed as a breakthrough that will allow for more precise and faster surgery, projection mapping is being adapted to display images of internal organs on a patient's body for video projection.

The technique is the brainchild of optical equipment maker Mitaka Kohki Co. in Mitaka, western Tokyo, Panasonic Corp. and Kyoto University Hospital. It is expected to serve as a road map in handling liver cancer and other kinds of carcinoma.

Under conventional methods of treatment, liver tumors to be resected are highlighted by injecting a fluorescent pigment known as ICG into the blood stream.

Parts that need to be removed show up in a different color due to differences in the pigment’s blood concentration when exposed to near-infrared light and filmed with a dedicated camera.

But the colored images can only be checked on a monitor, which forces surgeons to continually avert their gaze from the patient.

That's not the only disadvantage. It gets more difficult to ascertain resectable sections from healthy parts the deeper the surgeon probes into the tissue, although the color difference is obvious on the surface.

To address these issues, the newly developed Medical Imaging Projection System (MIPS) reflects colored images directly on the patient’s liver with a projector set up above the operating table.

When the liver is gently nudged into a different position, the location of the projected image is adjusted to within 0.2 second with a margin of error of 2 millimeters or less.

The technology eliminates the need for surgeons to turn to the monitor to improve precision. Reduced bleeding and surgery time are other benefits.

Satoru Seo, an assistant professor of transplantation surgery of the liver, biliary tract and pancreas at Kyoto University, was involved in the development of the system.

Explaining how innovative it is, Seo said: “Surgeons broke into a cheer when the technology was presented for the first time at an academic conference. This rarely happens given that attendees typically listen silently to the presentation on such occasions.”

The MIPS can also be applied to other internal organs.

In breast surgery, the technology will allow surgeons to confirm whether breast carcinoma has spread to other areas.

The system is comprised of a projector, infrared camera, monitor and other components. It was released for commercial use in March with a price tag of 24 million yen ($223,300). Clinical trials for the system started in 2014, and it gained health ministry approval last November.

“We plan to expand the method’s scope of application even further,” said Katsuyuki Nakamura, head of Mitaka Kohki’s advanced medical equipment development division. “We want it to spread to the entire world once we obtain approval for its use overseas as well.”