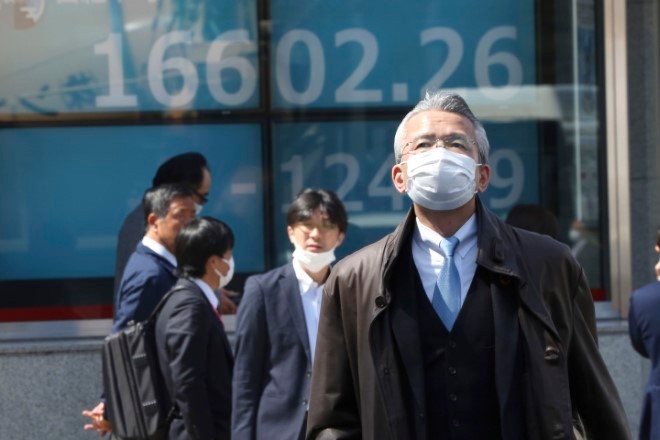 People walk by an electronic stock board of a securities firm in Tokyo on March 19. (AP Photo)

BANGKOK--Shares in Asia tumbled further on Thursday after the Dow industrials plunged 6.3 percent despite more government help for economies reeling from virus outbreaks.

Stocks fell in Tokyo and almost all other Asian markets as investors rushed to convert holdings to cash, bracing for a prolonged coronavirus-induced recession.

Australia’s S&P ASX/200 declined 3.4 percent to 4,7982.90 after the central bank announced it was cutting its policy rate by 0.25 percentage point to a record low 0.25 percent, among other measures.

“It’s amazing how desensitized we’ve become to central banks’ dropping huge numbers and massive amounts of cash in the markets’ laps,” Stephen Innes of AxiCorp said in a commentary.

The losses followed a more than 1,300 point, or 6.3 percent, decline Wednesday in the Dow Jones Industrial Average, which has now lost nearly all of its gains since U.S. President Donald Trump’s inauguration. The Dow closed at 19,898.92.

The New York Stock Exchange said Wednesday it will temporarily close its iconic trading floor in lower Manhattan and move to all-electronic trading beginning Monday as a precautionary step amid the coronavirus outbreak.

Signs that the outbreak’s impact will be far reaching and prolonged have undermined efforts to staunch the bloodletting on the markets.

Even prices for investments seen as very safe, like longer-term U.S. Treasurys, have been slumping as investors rush to raise cash.

The price of oil fell 24 percent on Wednesday, dropping below $21 per barrel for the first time since 2002. On Thursday, they had recovered some losses, with U.S. crude up 13.4 percent, or $2.76, at $23.13 per barrel in electronic trading on the New York Mercantile Exchange.

Markets have been incredibly volatile for weeks with the rising likelihood that the outbreak will cause a recession. The typical day this month has seen the U.S. stock market swing up or down by 4.9 percent. Over the last decade, it was just 0.4 percent.

The Dow, now at its lowest level since 2016, had surged more than 5 percent on Tuesday after Trump promised massive aid to the economy.

The S&P 500, which dictates how 401(k) accounts perform much more than the Dow, is down nearly 30 percent from its record set last month, though it’s still above its level on Election Day 2016.

The S&P 500’s slide was so sharp that trading was halted for 15 minutes Wednesday. The losses deepened after trading resumed. The S&P 500 recouped some losses to close 5.2 percent lower, at 2,398.10.

As big swaths of the economy retrench while much of society comes to a halt in an attempt to slow the spread of the virus, investors have clamored for Congress, Federal Reserve and other authorities around the world to support the economy until it can begin to reopen.

They got a big shot of that Tuesday, when the Trump administration briefed lawmakers on a program that could surpass $1 trillion and the Fed announced its latest moves to support markets.

On Wednesday, Trump signed an aid package, approved earlier Wednesday by the Senate, to guarantee sick leave to workers who fall ill. Trump’s authority under the 70-year-old Defense Production Act gives the government more power to steer production by private companies and try to overcome shortages in masks, ventilators and other supplies.

Investors are struggling with uncertainty about how badly the economy is getting hit, how much profit companies will make and how many companies may go into bankruptcy due to a cash crunch.

“It’s, it’s a very tough situation,” Trump said at a news conference, during which losses for stocks accelerated. “You have to do things. You have to close parts of an economy that six weeks ago were the best they’ve ever been.... And then one day you have to close it down in order to defeat this enemy.”

Even prices for longer-term U.S. Treasurys, which are seen as some of the safest possible investments, fell as investors sold what they could to raise cash. That pushed the yield on the 10-year Treasury sharply higher, to 1.22 percent. It had recently dropped below 1 percent for the first time ever.

The mayhem is creating a cash crunch that is putting pressure on financial institutions, said Jackson Wong of Amber Hill Capital in Hong Kong.

“That’s why the financial markets are performing so badly,” Wong said.

Last month, investors pulled $17.5 billion out of stock mutual funds and exchange-traded funds, even though stocks set all-time highs in the middle of the month. Money-market funds, meanwhile, drew $25.5 billion, according to Morningstar.

Investors are selling their highest-quality bonds to raise cash, thinking they will be the easiest to sell and will hold up the best. That’s paradoxically undercutting their prices further.

For most people, the coronavirus causes only mild or moderate symptoms, such as fever and cough, and those with mild illness recover in about two weeks. Severe illness including pneumonia can occur, especially in the elderly and people with existing health problems, and recovery could take six weeks in such cases.

The turmoil is also rocking foreign exchange markets as investors scrounge for U.S. dollars. The Chinese yuan, or renminbi, fell to 7.026 to the dollar on Thursday and the Thai baht was trading at 32.55 per dollar.