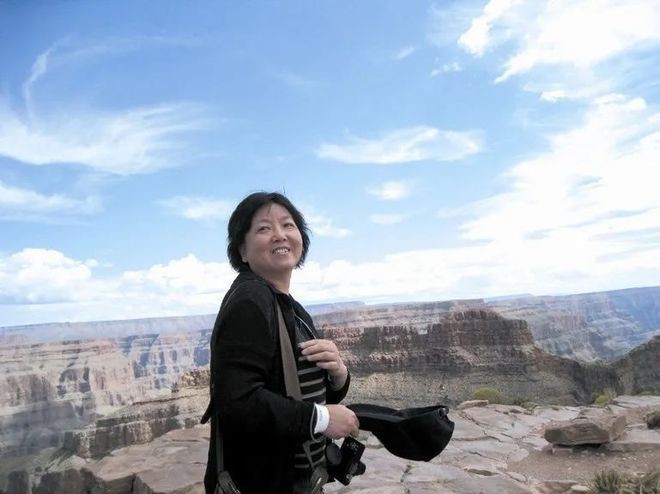 Writer Fang Fang, who lives in Wuhan and continues posting her diary on the internet (From Fang Fang's blog)

SHANGHAI--To embattled residents of Wuhan, blogger Fang Fang was nothing short of a hero. But to the authorities, she was a disruptive influence because of her honest descriptions of what is happening in the locked down Chinese city and her outspoken distrust of the government.

Fang Fang, 64, marshaled legions of fans with her daily posts that fueled strong anti-authority sentiment among people desperate to know the truth about the situation facing the city in Hubei province cut off from the outside world due to the new coronavirus outbreak.

Fang Fang is well known for a series of works depicting the lives of those on the lowest rungs of society in Wuhan. She is also held in high esteem as a novelist, having once served as the head of the writers' association in Hubei province.

Fang Fang started her online diary shortly after Wuhan went into lockdown on Jan. 23, and uploaded entries on a daily basis. Since then, she is said to have chalked up more than 100 million readers.

For a while after the city was sealed off, she chronicled the strained atmosphere of Wuhan.

An entry dated Jan. 27 stated that "the citizens' main interest focuses on face masks. I went out today for masks, but only found that all pharmacies closed."

Her Feb. 2 entry impressively referred to "the day's most pitiful" scene where "a girl was running after a hearse with a loud cry."

"The girl lost her mother but was not allowed to even bid a farewell," Fang Fang wrote. "She will never be able to learn where the mother's remains were sent."

But the content of the blog changed dramatically after Wuhan doctor Li Wenliang, 33, who had tried to raise awareness of the danger the virus posed in its initial phase but was reprimanded by police for "spreading false information," died from infection on Feb. 7.

Public sentiment turned against the Chinese authorities over its attempt to smear Li's reputation, prompting state-owned media to suddenly begin a campaign to honor the physician as a hero.

Fang Fang's blog gradually started garnering attention with its calm presentation of facts in a thoughtful manner, which was in sharp contrast to reports in the national media and their steady diet of "cheer up Wuhan" stories.

"There is now a much less distance between dead people and I," Fang Fang posted Feb. 9. "The younger brother of an acquaintance died, and then the parents and wife of a friend of mine, along with the friend, also died. Though trying to cry, people do not have tears to shed."

Authorities initially dismissed the notion of the virus being transmitted from person to person, which made it effectively impossible for residents to take appropriate precautions against the disease in its early stages.

Fang Fang expressed her pent-up anger against this miscalculation with the following post: "The assertion that 'the virus cannot transmit from human to human' has turned Wuhan into the city of blood tears and endless suffering."

Even after the media began touting the decrease in the number of newly infected patients in Wuhan in March, Fang Fang did not stop reporting what residents really felt.

"Leaders in Wuhan are pressing citizens to express their gratitude for the Communist Party and the state, but the notion is so bizarre," she wrote March 7. "The government is for the people and it is an entity to serve the people."

As Fang Fang stepped up her game with more forthright opinions, the online response from readers changed. They began expressing mistrust toward the government and bemoaning that they lived in a stuffy society where freedom of speech is not assured.

But this served only to heighten support for Fang Fang's efforts.

One person hailed her as someone "risking her life to write what few people talk about in this social situation, while another was heartened to having finally come across a blog carrying "the very truths we are seeking."

Comments from supportive readers poured in, including one who "can breathe deeply when looking through the diary in the stifling ambience of society."

Another person wondered why "is it so difficult to simply talk about truths?" One fan likened "Ms. Fang Fang to a woodpecker that pecks at a tree forever in order not to topple it, but to help it grow straight."

The blog, which initially focused on the misery in Wuhan, is now a forum for readers to discuss any issue affecting Chinese society.

Public distrust of the authorities became more apparent as the epidemic spread, mainly as a result of the campaign to tarnish Li's name and the manner in which the government went about concealing facts.

An online interview with Ai Fen, a doctor who works at the same medical center as Li, about what had occurred at the hospital since last December, was erased on March 10, generating much attention on social media sites.

In the hope of eventually finding an answer, Fang Fang presses on relentlessly airing her views.

The Asahi Shimbun tried to contact her through an acquaintance of hers and others, but didn't get a reply.

Her online diary may provide a clue as to why.

"I started writing because I felt it is important to record facts and feelings in Wuhan as a writer living here," Fang Fang said. "I must continue writing even though my articles are deleted.

"I record such tiny events in daily life because I want to tell readers that deceased people and infected patients are not the only victims of the man-made calamity and that we--all ordinary people--are also forced to pay the price."

Fang Fang continues to cast a critical eye on China.

Her Feb. 24 entry states: "Whether a certain nation is civilized is not determined based on the skyscraper and automobile numbers; strong weaponry and military; advanced technology and prestigious artworks; grand-scale meetings and gorgeous fireworks; or hordes of extravagant travelers going through the world. The only criterion is how it treats people in vulnerable positions."

With the crisis winding down in Wuhan, Fang Fang posted this final entry.

That same afternoon, the Hubei provincial government announced that it will lift the lockdown of Wuhan on April 8 under certain conditions.

“The diary will become the final one today. But that does not mean that I will not write anything from now on," Fang Fang continued. "As a duty of a person who actually experienced the miserable days of Wuhan, I will continue to pursue the responsibilities of the authorities.”

Fang Fang ended her blog with the following message:

“I want to express my gratitude to the fact that many readers supported my diary and encouraged me. Whenever I read opinions sent to the diary, I was able to think that so many people have the same ideas as mine. Because of that, I did not feel loneliness even on the days of the lockdown.”