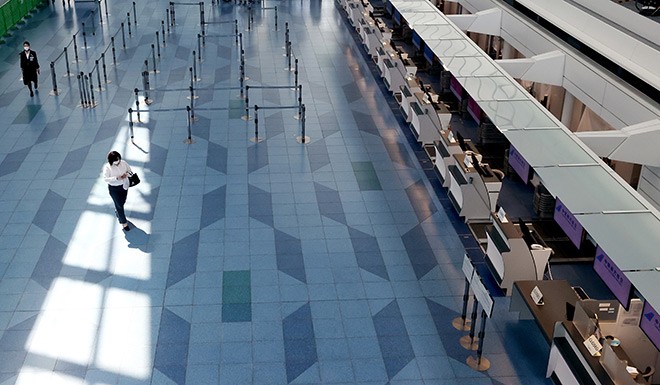 The No. 3 Terminal at Haneda International Airport in Tokyo is nearly empty after many flights were canceled on March 19. (Shiro Nishihata)

The number of foreign visitors to Japan in February was 1,085,100, a staggering 58.3-percent plunge from the same month a year ago, according to data released by the Japan Tourism Agency (JTA) on March 19.

It was the biggest slide since April 2011, when visitor numbers tumbled 62.5 percent in the aftermath of the Great East Japan Earthquake, tsunami and nuclear disaster.

The drop in visitors from China was particularly pronounced in February, when only 87,200 Chinese, an 87.9-percent drop year-on-year, came to Japan.

That was the largest decline among Chinese travelers since the JTA started the survey in January 1975.

In January this year, the number of Chinese visitors increased by 22.6 percent compared with the same month in 2019.

But after the novel coronavirus spread in China, particularly in Wuhan, Hubei province, the Chinese government banned group tours from Jan. 27, immediately affecting the tourism numbers in Japan.

February marked the first year-on-year decline in Chinese visitors since September 2018, when a huge earthquake in Hokkaido scared away foreign visitors as a whole.

The number of South Korean visitors to Japan has fallen since last summer over trade, security and wartime-related issues that strained bilateral relations. The spread of the new coronavirus has worsened those numbers.

In February, 143,900 South Koreans visited Japan, down 79.9 percent year-on-year and the steepest decline since the survey started.

In January, the decrease in South Korean travelers was 59.4 percent.

Elsewhere around Asia in February, the number of visitors from Taiwan dropped 44.9 percent from the same month a year ago, while visitor numbers from Malaysia fell 27.4 percent and Indian travelers tumbled 27.2 percent.

The number of U.S. visitors was down 20.8 percent in the month.

Hiroshi Tabata, commissioner of the JTA, said at a March 19 news conference that the current situation will “become even tougher,” in light of the fact that the Japanese government has tightened immigration controls and restricted entry of people from China and South Korea from March.

He said the JTA will help to encourage domestic tourism as soon as the COVID-19 outbreak settles in Japan.

The number of Japanese outbound tourists in February was 1,316,800, down 14.2 percent from the same month the previous year. In January, the decline was 4.9 percent.

The huge declines in tourism numbers have already taken a toll on businesses nationwide.

Foreign tourists packing the streets around the famed Kiyomizudera temple in Kyoto were once a common sight. But now, the pedestrian traffic consists mainly of Japanese visitors going up and down the approach to the temple.

A 69-year-old owner of a souvenir store in the area said that more than 90 percent of his customers are from overseas. He said the store’s sales in March were less than 10 percent of the same month last year.

“I have been in this business since my parents’ generation, but I have never seen such a dire situation before,” the owner said. “I want foreigners to come back. Otherwise, my store cannot survive.”

Kyoto has long been a popular destination for overseas travelers, who accounted for 46.9 percent of guests at major hotels in the city in 2019, according to data collected by the Kyoto City Tourism Association.

It was the highest ratio since the research started in 2014.

However, the overall hotel occupancy rate that year was a record-low 82.3 percent, mainly because many lodging facilities targeting foreign visitors opened up for a piece of the action.

But now with fewer tourists available because of the novel coronavirus outbreak, the competition has further intensified. Major booking websites have listed many rooms in Kyoto for prices between 1,000 yen ($9) and 1,999 yen per night.

The Hotel Association of Kyoto, an organization of about 130 operators of hotels and guest houses in the city, conducted a survey in March on the impact of the novel coronavirus.

Of the 70 operators who responded, 47 percent said their occupancy rate in February was “less than 20 percent.”

More than half of the operators said they “have already decided to close the business” or they “will likely consider going out of business or changing to a rental or other business” if the situation continues.

In Fuji-Kawaguchiko town in Yamanashi Prefecture, businesses have suffered not only because of the drop in foreign visitors but also the disappearance of domestic tourists.

The town government is expected to include 150 million yen in a supplementary budget for next fiscal year to stimulate tourism demand and support accommodation costs in the town known for Kawaguchiko lake and a majestic view of Mount Fuji.

“Our town relies on the tourism industry. We hope to prevent the number of visitors from further slipping, if only by a little,” a town official said.

(This article was written by Miho Tanaka, Naoyuki Takahashi and Hideo Sato.)