JOC board member calls for postponement of Tokyo Games 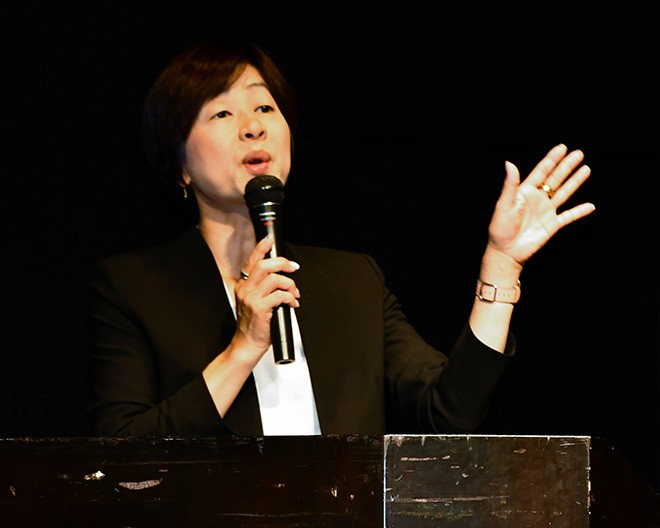 Kaori Yamaguchi, a board member of the Japanese Olympic Committee, at an event in Morioka, Iwate Prefecture, in 2019 (Asahi Shimbun file photo)

A Japanese Olympic Committee board member called for the postponement of the Tokyo Summer Games, saying the feelings of the competitors amid the novel coronavirus pandemic must be the top priority.

“Opening the Olympics at a time when athletes could not train as much as they wanted to runs counter to the motto of ‘athletes first,’” Kaori Yamaguchi, who won a bronze medal in judo in the 1988 Seoul Olympics, said in an interview with The Asahi Shimbun on March 19. “The Games should be postponed.”

Yamaguchi, 55, said she will voice her opinion about the Tokyo Olympics at a board meeting scheduled for March 27.

The sports extravaganza is scheduled to open in late July. But athletes and officials here and overseas have started questioning the wisdom of going ahead with the event while the world is battling the spread of COVID-19 infections.

“Who will be happy about holding the Summer Games in July when we are now witnessing so many people’s lives being turned upside down?” Yamaguchi said.

To deal with the coronavirus outbreak in Japan, professional baseball and soccer leagues have suspended their seasons. Sports events, including the hugely popular spring national high school baseball tournament, have been called off.

Yamaguchi noted that the fight against the coronavirus has been likened to war in Japan and abroad. She suggested that a reluctance to speak out against holding the Olympics as planned reflects the public’s mindset during the final stages of World War II.

“In Japan, there was an atmosphere in which many people felt they could not voice their opposition even though they knew that the country would lose,” she said. “I am afraid that many JOC members and athletes feel discouraged from saying that a postponement would be better.”

Yamaguchi’s comment drew fire from her boss, Yasuhiro Yamashita, president of the JOC, on March 20.

“It is understandable that people have various opinions,” Yamashita said when reporters asked him about Yamaguchi’s call for a postponement. “But it is extremely regrettable that someone within the JOC would make such a comment.”

Yamashita was at an Air Self-Defense Force base in Miyagi Prefecture, where a ceremony was performed to welcome the Olympic flame from Greece.