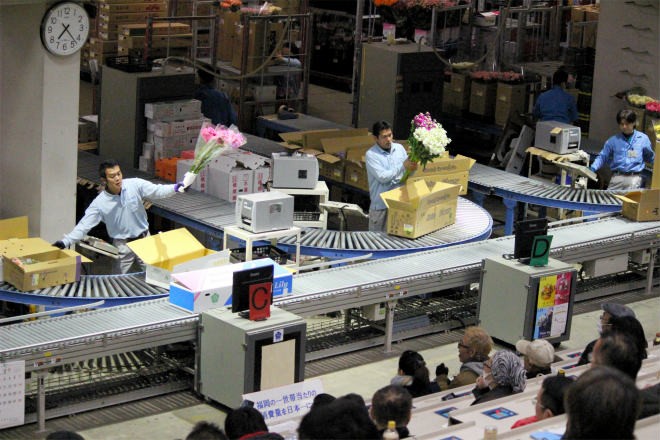 Auctioneers call for bids on flowers at a market in Fukuoka's Higashi Ward on March 9. (Shinya Maeda)

FUKUOKA--Crushing sales declines in the floral market here following the coronavirus outbreak have producers and sellers scared that depleted demand will hollow out the industry.

Ornamental plant products normally enjoy robust sales in March, but business is being decimated as events and rituals are scrapped across Japan due to the pandemic.

Slews of school and marriage ceremonies have been called off or scaled down to stop the spread of the flu-like virus, eliminating major sources of demand for flowers.

Insiders fear farmers' inability to make a profit will undermine their motivation to produce flowers and undercut the industry.

The Fukuoka Flower Market in Fukuoka's Higashi Ward seats 311 people, but on March 9 only 153 buyers, more than 20 percent fewer than usual, were waiting for the auction to start at 7 a.m.

When the auctioneer thrust a white prairie gentian flower high in the air and called out an opening price of 141 yen ($1.28) per flower, no one bid on it.

As the price slid to 132 yen and then to 120 yen, the auctioneer became increasingly agitated.

It was only after the price sank to 102 yen that someone bought the gentian.

Auctioneers are having to drop the asking price four or five times to make a sale, Fujikawa said, adding that in normal times an auctioneer never needs to lower it more than twice.

"I've been working in the market for more than 30 years, but nothing like this has ever happened," he lamented.

Driven by nationwide demand from farewell events, graduation rites and parties held during the month, March is usually a peak month for flower sellers, Fujikawa said, similar to the sales bump for end-of-the-year celebrations in December.

But prices for plant products are down 20 to 30 percent this year following the coronavirus outbreak.

Sales of white flowers, popular for weddings, have been especially hard-hit.

Bridal agencies canceled orders for 3,000 flowers for use at parties in March, a Higashi Ward flower broker said.

Flower orders have nosedived 70 percent year-on-year after functions and events were abandoned in late February, according to Michiyo Ohara, 45, a chief at the broker's wholesale division.

Schools have also simplified their graduation ceremonies since the outbreak began, dealing another heavy blow to the flower market.

"I've heard some schools are only going to put one bundle of flowers in the gym and skip the tradition of handing out bouquets to students and teachers," Ohara said.

In Japan, it is customary for patrons or superfans to send extravagant standing bouquets to businesses or individuals they support to celebrate openings or events.

But supporters have canceled a total of 1.5 million yen in orders this season for custom-made floral stands after concerts of Gackt and other singers were postponed in Fukuoka due to the virus, said ABC Flower, which operates flower shops in Fukuoka's Nakasu district and elsewhere in Japan.

"It's painful for us not to receive income that should have otherwise come in," said ABC Flower President Takayuki Shiki, 49.

The plummeting sales may also lead to lowered morale among farmers in famous flower-producing regions.

Due to their warm weather, many areas in the Kyushu region and Okinawa actively produce flower products.

Fukuoka Prefecture in 2017 shipped the third-largest volume of flowers in Japan. Kagoshima Prefecture took the No. 9 spot, while Kumamoto Prefecture ranked 10th.

Japan's flower producer output is dwindling due to the advanced ages of farmers, said Satoshi Hamaguchi, 46, an official from the vegetable and flower section of JA Zennoh Fukuren, a branch of the National Federation of Agricultural Cooperative Associations in Fukuoka city's Chuo Ward.

"I'm worried that if prices don't go up even during the usually busy season of March, producers may lose their desire to cultivate flowers," Hamaguchi said.