Retailers move ahead of schedule on charging fees for plastic bags 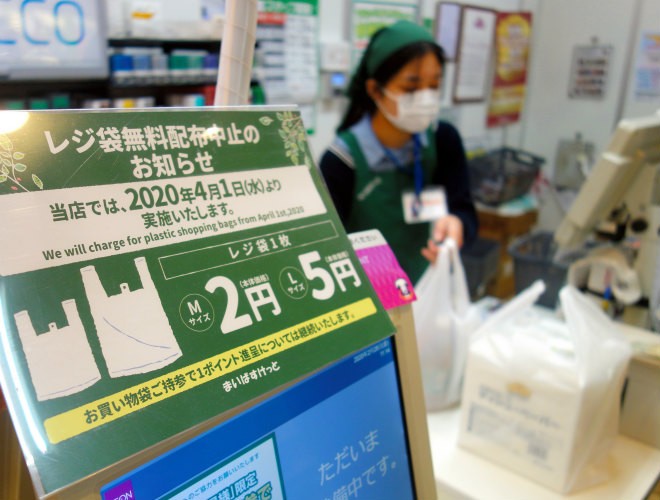 A signboard is set up on Feb. 28 to explain mandatory fees for plastic shopping bags from April at an Aeon Group-affiliated My Basket small supermarket store in Tokyo. (Shimpei Doi)

Retail giants will start charging fees for single-use plastic shopping bags from April, three months before the practice becomes mandatory, to reduce waste that is wreaking havoc on the environment.

Customers will be charged 2 yen (about 2 cents) to 5 yen per plastic bag at Aeon Group-affiliated outlets, while Uniqlo clothing shops will switch from plastic to 10-yen paper bags.

Aeon Co. announced Feb. 28 that it will stop free distribution of plastic shopping bags at most of its directly-managed convenience stores, small supermarkets, Welcia drugstores and other outlets from April 1.

The number of Aeon-affiliated shops charging for plastic bags will increase to 7,300 in April. About 2,400 of its shops, including 500 general merchandise supermarkets, are already charging customers for the bags.

The Aeon group’s remaining 4,000 shops, such as convenience store franchises, will start charging for plastic bags by July.

Aeon will also introduce 10-yen paper bags for the clothing sections at its general merchandise stores and elsewhere.

Its plastic bags, containing 30 to 50 percent of biomass materials, are priced at 2 to 5 yen each, excluding tax.

“We want to further reduce plastics and promote lifestyles in which resources are not disposed of,” said Takahiro Suzuki, head of Aeon’s department in charge of environment and corporate social responsibility.

“The charges are aimed at encouraging customers to bring their own bags,” a public relations official said.

Another major drugstore chain operator, Cocokara Fine Inc., which will merge with MatsumotoKiyoshi in autumn next year, also plans to charge for plastic bags at all of its outlets from April.

Fast Retailing Co., which operates the Uniqlo casual clothing chain, will do away with plastic bags and charge 10 yen, excluding tax, for paper bags from April at all Uniqlo and GU stores in Japan.

KEEPING IN STEP WITH OTHERS

“Apart from the social need, we must also keep in mind that we are keeping in step with the industry and other companies,” a public relations official said.

The huge damage caused by plastic waste, particularly in the oceans, has been highlighted in recent years.

The government initially planned to require all retail outlets, regardless of business scale, to start charging customers for plastic bags in April.

But it delayed the mandatory fees after an industry organization consisting of convenience stores and other entities said they needed more time to prepare for the change.

(This article was written by Akifumi Nagahashi and Shimpei Doi.)