Theaters move cautiously to stage plays due to virus concerns 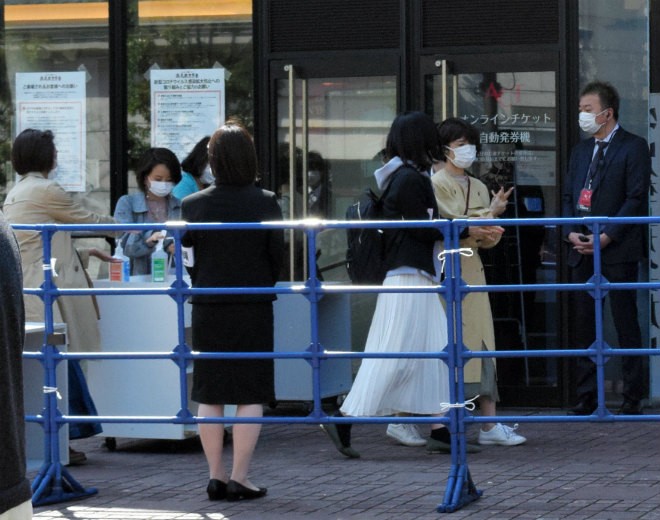 Theater-goers disinfect their hands before they enter the TBS Akasaka ACT Theater in Tokyo’s Akasaka district on March 19. (Hideki Inoue)

Some large theaters in Tokyo moved cautiously to reopen for live stage performances March 20 despite a government request to call off or postpone cultural events to stem the spread of the new coronavirus.

But other producers abruptly canceled performances scheduled to be held the same day, illustrating the confusion that continues to prevail in responding to the spread of the epidemic.

In the capital’s Shibuya Ward, “Pizarro,” a play featuring acclaimed "Last Samurai" actor Ken Watanabe in the lead role, opened on March 20 at the Parco Theater, seven days behind schedule.

It was the first play to be performed after the theater reopened in January following a face-lift.

All 636 seats were initially expected to be taken, but only half were filled.

Audience members were each seated with an empty seat on either side in line with guidelines to keep a safe distance from others.

Stands were set up inside the theater so audience member could sanitize their hands with antiseptic solution.

Each person was screened for signs of fever by having their temperature taken. Nurses were on standby throughout the performance in case of an emergency.

The intermission was set for 25 minutes, 10 minutes longer than usual, to ease congestion in restrooms and ensure adequate ventilation.

A 40-year-old woman who came from Niigata Prefecture to see the play had mixed feelings about the reopening, given that others were too afraid to show up because of their concerns about the coronavirus.

As precautionary measures against the virus, sales of refreshments were suspended at the lobby of the venue and the smoking room was closed.

Tickets sold on the day of the performance ensured that each audience member had an empty seat on either side.

An announcement urged the audiences to wear face masks and refrain from conversing with each other during the intermission.

After the matinee performance, popular actress Kei Aran expressed her gratitude to those who showed up.

“Some companies had to cancel their scheduled performances despite their hard work,” she said during the curtain call. “We are grateful we were able to open and you did have to see our performance wearing masks. Our work is not possible without you.”

According to a source with inside knowledge of the theater industry, theater operators, producers and theater companies got together to discuss the merits of all opening on the same day so that none of them faced the prospect of being singled out for criticism from the public for opening programs.

Some producers, however, abruptly chose to cancel scheduled performances.

A performance of “Endless Shock,” a musical starring actor Koichi Domoto at the Imperial Theater in Tokyo, was canceled on the morning of March 20.

Producers said the decision was made the previous day based the recommendation by an expert panel advising the government on the coronavirus.

Performances from the evening of March 20 through March 31 were all canceled.