Staff at JR Harajuku Station express their appreciation to the public for using the old train station building that served the area in Tokyo’s Shibuya Ward for 96 years. Footage taken around 1 a.m. on March 21. (Hikaru Uchida) 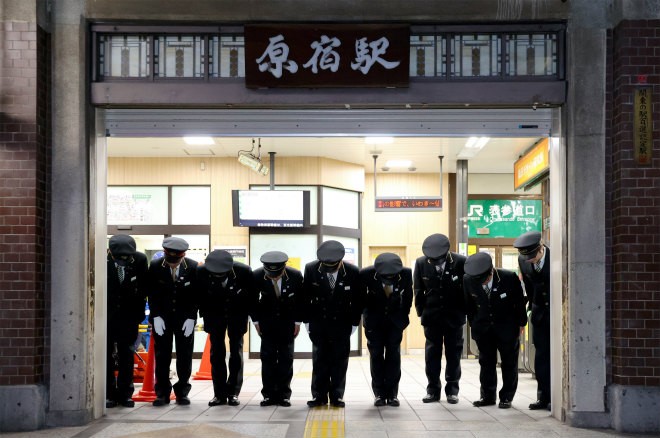 Staff at JR Harajuku Station express their gratitude to the public for using the old train station building in Tokyo’s Shibuya Ward. The structure opened in 1924 and closed for good around 1 a.m. on March 21. (Hikaru Uchida)

A new station building made its debut at JR Harajuku Station in Tokyo on March 21, replacing the capital's oldest and much-loved wooden train station.

The old structure, completed in 1924, is scheduled to be demolished after the Tokyo Olympics and Paralympics.

It shuttered for the last time around 1:10 a.m. on March 21 after the last early morning run. Station staff formed a line and bowed to the public to express their gratitude for using the building that opened 96 years ago.

The wooden station building stood out because it was built in European style with an iconic small spire on the roof, which won it legions of admirers.

Shukichi Kojima, a 52-year-old resident of Shibuya Ward where the station is located, said he was sorry that the old building has to go, given that it had blended in so well with the pop-culture surroundings of Harajuku.

Operator East Japan Railway Co. said it decided to demolish the aged structure due to concerns about its ability to meet fire safety standards.

JR Harajuku Station is on the JR Yamanote Line, which loops around central Tokyo.

The new train station building has two stories: It houses a convenience store on the first floor and a cafe on the second. Its floor space is four times as large as that of the old building.

The new station building features a west exit near the tranquil wooded Meiji Shrine, in addition to the current Takeshita Exit and Omotesando Exit (east exit).

(This article was written by Ayateru Hosozawa and Noriyuki Kaneta.)