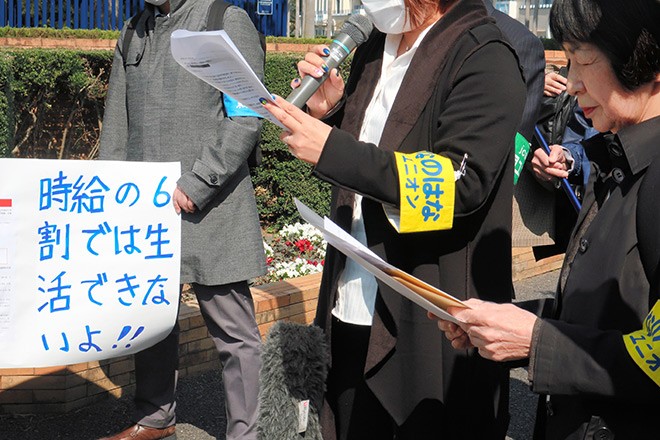 A woman working at Tokyo Disneyland reads a request for more payment before the main office of Oriental Land Co., operator of the theme park, in Urayasu, Chiba Prefecture, on March 19. (Mana Takahashi)

Tokyo Disney Resort workers are demanding higher paid leave as they are struggling to make ends meet since the theme parks closed in late February due to the spreading new coronavirus.

Some say they are not receiving even a subsistence level as they are taking home less than 50,000 yen ($450) a month in reduced paid leave.

The park employees, who are called cast members, are being paid roughly 60 percent of the basic hourly rate during the hiatus, but are seeking their regular pay, including various allowances.

Tokyo Disneyland and Tokyo Disney Sea were closed on Feb. 29 as large facilities across the nation were urged to shut down to contain the spread of the virus.

Oriental Land plans to reopen the parks in early April.

About 20,000 cast members work for the two parks, including many nonregular employees. Except for a handful who are needed for rehearsals, most such members have been told to stay home during the closure period.

Union members said Oriental Land offered no explanation about reduced paid leave after it decided to close, but sent an email asking them to monitor their health by taking their temperature.

The company’s rules stipulate that as compensation for absences from work, it will pay 60 percent of workers’ basic hourly rate after allowances for clothing and late night or early morning shifts are subtracted.

“If we put in 110 hours a month at an hourly pay of 1,100 yen, we will receive 120,000 yen or so,” said a woman who works as a cast member. “After taxes and social security are withheld, we are left with less than 50,000 yen a month. Some workers are thinking about quitting because they cannot scrape by on that amount.”

Under the Civil Law, employers are required to pay full paid leave to workers during the closure period if the company is responsible for the shutdown.

The Labor Standards Law stipulates that at least 60 percent of a  worker’s average wage should be paid as compensation for work absences. If an employer violates the law, it will be slapped with a fine of up to 300,000 yen.

The average wage of a worker is calculated by dividing the total wages received in the most recent three months by the number of days over that period.

The total wages include allowances for travel, late-night shifts and others.

Union members accuse Oriental Land of violating the law by basing its payment only on the basic hourly wage and excluding allowances.

But Oriental Land defended its pay scale in an interview with The Asahi Shimbun.

“When workers joined the company, we explained to all of them about leave compensation,” said an official. “We will pay based on the in-house rules.”