Japan to restrict entry of all passengers from U.S. from March 26 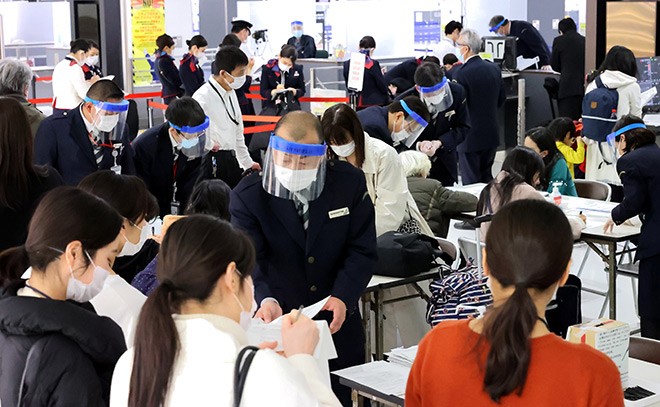 Quarantine officers ask passengers arriving on a flight from Frankfurt to fill in a questionnaire form at Narita International Airport in Chiba Prefecture on March 21. (Tsubasa Setoguchi)

Japan will impose entry restrictions on travelers from the United States, including Japanese, after increasing the warning level for the country due to the COVID-19 pandemic.

“Entrants from all areas of the United States, including Japanese nationals, will be asked to stay at a location designated by the head of a quarantine station and not to use public transportation in Japan for 14 days,” Prime Minister Shinzo Abe said at an Upper House Budget Committee meeting on March 23.

The policy was set at a meeting of the COVID-19 task force headquarters the same day.

The restrictions will be enforced on the entrants who arrive in Japan via planes and vessels that have departed on and after midnight of March 25. The policy will continue until the end of April and may be extended.

The government will not take any measures regarding visas that have already been issued, such as voiding them.

The Foreign Ministry on March 22 raised the infectious disease warning for the United States to Level 2, third from top on a four-stage scale, for the first time, urging the public to avoid nonessential travel to the country.

Japan has gradually introduced entry restrictions from countries under the Level 2 warning, namely China, South Korea, Iran, Egypt and the entire European Union except for five countries in eastern Europe.

The decision to restrict entry of visitors from the United States is in accordance with that policy.