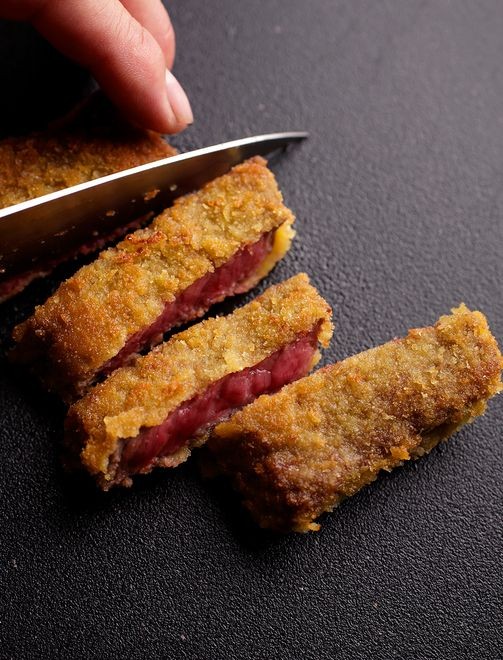 * * *
This week we focus on shallow-frying using a pan to make “bifu katsu” (breaded beef cutlet), which has an enticing golden coating.

The dish, a take on Italian fried veal culet and olive oil, utilizes both minimum heat and seasoning. If you love plain red meat, you're not going to be disappointed with this recipe.

The keys to getting a thin, fragrant and crispy coating that doesn't come off the meat are two steps involving stickiness.

First, make your breadcrumbs finer, so they stick to the meat evenly.

Then, place the oil and meat in your frying pan before placing the pan over heat and let the meat stick to the pan.

Using low heat, the cutlet will get browned evenly and is less likely to shrink. The garlic mixed in the breadcrumbs won't burn and as it browns will emit a pleasing aroma. Cooking over low heat also maintains the natural flavor of the olive oil.

Though our recipe is for cooking the meat medium rare, you can adjust it to suit your preference.

In the recipe, salt is used separately in three stages: when seasoning the meat before cooking; in the breadcrumbs; and as a finishing touch to bring out each ingredient.

After repeated use for deep-frying, oil turns darker in color, thickens and starts to give off an unpleasant odor. Though it depends on how it is used, you should only use the same oil three to four times. It will keep somewhat longer if old oil is topped off with new oil.

After use, run oil through paper while it is still warm and pour into a lidded heat-resistant glass container or in specialized oil pots to prevent exposure to air. Since light will also cause the oil to deteriorate, store it in a dark place such as under the sink away from heat sources. Placing it in the fridge has an adverse effect since dew drops may fall into the oil.

1. Place breadcrumbs in plastic bag and make them finer by crushing (PHOTO A). Add a pinch of salt, grated garlic and mix thoroughly. Cut shiitake into 1-cm-wide slices.

2. Pound beef till it is less than 1 cm thick. A sturdy bottle may be used on meat covered with plastic wrap if a meat hammer is not available. (PHOTO B).

3. Sprinkle bit of sugar and salt on meat. Dust with flour and dip in egg. Place on breadcrumbs that have been spread out, scoop up breadcrumbs around it and scatter on top. Press with palm so they adhere to the meat. Bread other side in same manner.

4. Pour olive oil in frying pan. An amount that spreads out evenly with a bit extra is needed. Place meat in center, fill gap with shiitake. Cook on low heat for 5 minutes without moving. When breadcrumbs on edge brown lightly, turn. (PHOTO C). Cook further for about 2 minutes.

5. Turn heat up a little. Tilt pan so excess oil runs from meat. Remove and sprinkle bit of salt while oil on coating is still hot. Cut into easy-to-eat pieces and serve with shiitake.

Hiroshi Hirai is a researcher at the central research institute of Nisshin OilliO Group, a major manufacturer of cooking oil.

All that is required is to switch the beef with fish fillet. Shallow-fry a fillet (90 grams) of swordfish (“mekajiki”) in the same way and serve with "sudachi" citrus. It goes well with baby leaves. Swordfish may be replaced with sea bream or autumn salmon.

Oil used for frying deteriorates faster if it has been used at high temperature. The degree of deterioration also depends on the ingredients being fried. An experiment to see how much the oil deteriorated (acid value) by repeatedly cooking potato tempura, “korokke” that is similar to croquette, and fried chicken showed that oil used to cook fried chicken deteriorated most.

Oxidation progresses when the coating remains in the oil or the lecithin in the meat fat or yolk in the coating melt into the oil.