K-1 event draws 6,500 in Saitama, despite calls for cancellation 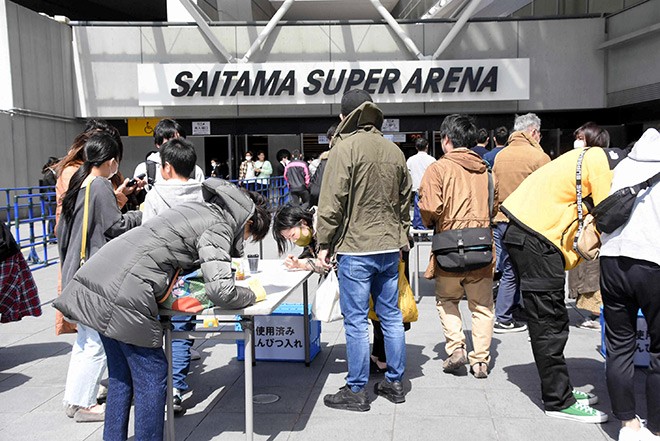 Fans at the K-1 World GP event are asked to write their names, addresses and phone numbers on their ticket stubs at the entrance area of the Saitama Super Arena in Saitama on March 22. (Shin Kasahara)

“It is regrettable, although we asked them several times for cooperation,” Saitama Governor Motohiro Ono said in a statement after the K-1 World GP event was held at the Saitama Super Arena.

A central government expert panel on March 19 called on organizers of large-scale events to exercise caution, including canceling plans, to prevent the spread of the virus.

But the show went on.

Organizers said they fully implemented preventive measures against the virus, such as handing out surgical face masks for all spectators, providing thermometers to let them take their temperatures at the entrance, and keeping doors open to improve ventilation.

Takumi Nakamura, producer of the K-1 event, also said the fans were obliged to submit their names, addresses and phone numbers on their ticket stubs so that the organizers could trace the routes of possible infections.

Ticket refunds were not provided for those who did not want to attend, according to the organizers.

One person in attendance said repeated announcements instructed spectators to wear their face masks, but some fans removed them in the excitement of the fights.

Koji Wada, a professor at the International University of Health and Welfare who specializes in public health issues, said the organizers will face harsh criticism if the event has caused an infection cluster.

(This article was written by Shin Kasahara and Yoko Hasegawa.)