Postponing Tokyo Games to when? Schedule full through 2022 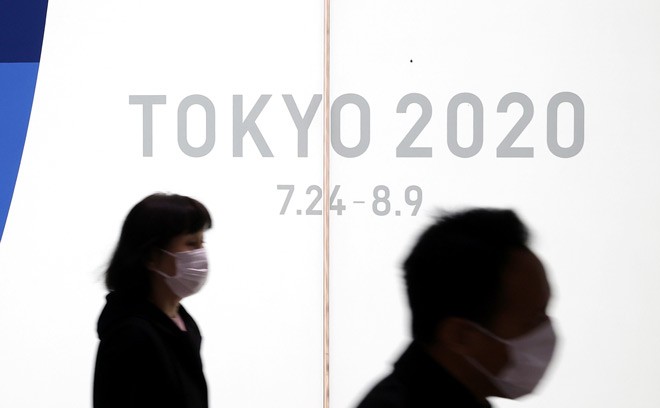 A board shows the dates of the Tokyo Olympics in the capital’s Shinjuku Ward on March 23. (Shiro Nishihata)

With no end in sight to the COVID-19 pandemic and as some countries and athletes voice concerns, organizers of the 2020 Tokyo Games have started discussing postponing the sporting extravaganza.

But the International Olympic Committee, which has the final word, did not mention the most important detail, the proposed new dates.

The IOC on March 22 said the organization will start looking into options including postponing the Summer Games due to the worldwide novel coronavirus spread.

However, a postponement could disrupt an already packed schedule for the next two years with major international competitions looming on the horizon.

World championships for both aquatics and track-and-field athletes are in the works for summer 2021.

Top-class swimmers are expected to compete in the FINA World Championships, scheduled from July 16 to Aug. 1, 2021, in Fukuoka. It will be the second time for the event to be held in Japan since Fukuoka hosted it in 2001.

The World Athletics Championships are scheduled to be held in Oregon from Aug. 6 to 15, 2021.

Both competitions are major revenue-generating events from the broadcast rights for many sports associations.

The Union of European Football Associations (UEFA) has already postponed the Euro 2020 tournament that was initially scheduled in June in 12 cities in 11 countries around Europe. The games, which send soccer fans into a frenzy, are now scheduled from June 11-July 11, 2021.

Sebastian Coe, president of the World Athletics (IAAF) and chairman of the organizing committee for the 2012 London Olympics, earlier this month told BBC Radio, “It seems on the surface an easy proposition but athletics has its worlds on that date (summer 2021), the Euros in football have been moved back a year.

“The sporting calendar is a complicated matrix, and it is not easy to move from one year to the next,” Coe said.

But after the IOC’s March 22 announcement, the IAAF issued a statement saying the organization is ready to have talks with the IOC and all sporting organizations to arrange alternative dates for the world championships.

The World Masters Games (WMG), although not an event drawing top athletes, is scheduled to be held in nine prefectures in the Kansai region in May 2021.

The competition to promote lifelong sports have been held the following year after the Summer Olympics. The 2021 event, for competitors over the age of 30, will be the first to be held in Asia. The organizer has set a goal to have 50,000 participants for the Kansai event.

The Winter Olympics and Paralympics will be held in Beijing in February and March 2022, respectively.

The FIFA World Cup is also on tap in Qatar from November to December 2022. The quadrennial international soccer event is usually held in June and July when professional soccer leagues in Europe are in their off-seasons.

But the Qatar competition has been rescheduled to later in the year to avoid the region’s unbearable summer heat.

In September 2022, the Asian Games will be held in Hangzhou, China. Athletes from the Oceanian region will participate in some competitions at the Asian Games for the first time, and eSports will also be added to the lineup.