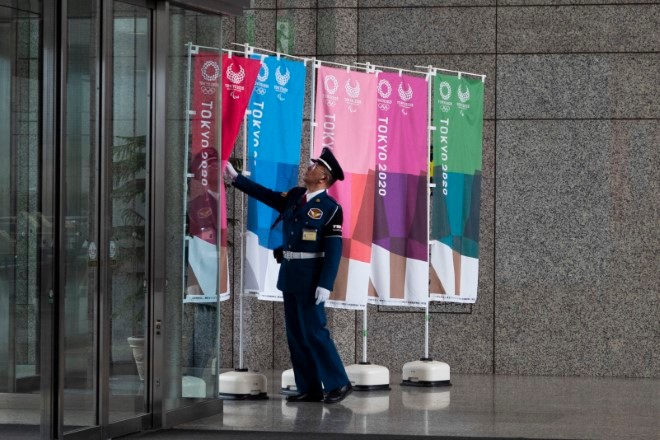 A guard straightens a banner promoting the Tokyo 2020 Olympics in Tokyo on March 23. (AP Photo)

TORONTO/TOKYO--Canada became the first country to boycott the Tokyo Games due to the coronavirus pandemic and Australia told its athletes to prepare for an Olympics next year as Japan and the IOC flagged the prospect of a postponement for the first time.

Opposition to holding the Games in July has risen sharply in the past 48 hours, with several major stakeholders such as U.S. Track and Field and UK Athletics, along with some national Olympic committees, calling for a delay because of the pandemic.

More than 13,000 people have died globally since the coronavirus outbreak began.

On Sunday, the International Olympic Committee (IOC) said it would hold discussions that would include an option of putting back the July 24 start date or even moving the Games by a year or more.

Prime Minister Shinzo Abe told parliament on Monday postponing the Olympics may become an option if holding the Games in its “complete form” became impossible.

“If that becomes difficult, we may have no option but to consider postponing the Games, given the Olympic principle of putting the health of athletes first,” he said.

Abe also said calling off the Games entirely was not an option, echoing the IOC position in its statement that cancellation “was not on the agenda.”

The organizing committee for the Olympics and Paralympics will be holding a news conference in Tokyo at 2:30 p.m. local time (0530 GMT) on Monday.

Canada’s Olympic and Paralympic Committees urgently called on organizers and the World Health Organization (WHO) to postpone the Games for one year.

“We offer them our full support in helping navigate all the complexities that rescheduling the Games will bring,” the committees said in a statement. “While we recognize the inherent complexities around a postponement, nothing is more important than the health and safety of our athletes and the world community.”

While Canada is the first country to say it will not send a delegation to compete in the summer of 2020, the Australian Olympic Committee (AOC) said on Monday its athletes should prepare for a Tokyo Games taking place in 2021.

“The AOC believes our athletes now need to prioritize their own health and of those around them, and to be able to return to the families, in discussion with their National Federations,” the AOC said in a statement.

Canada’s Olympic Committee said it reviewed the IOC’s assessment of the situation and applauded it for recognizing the need to consider alternate scenarios for hosting the Games.

On Friday, Canadian Prime Minister Justin Trudeau had said it was up to Canadian athletes to decide on going to Tokyo even if the Games went ahead.

Canada’s boycott will add to growing pressure on the IOC to alter the schedule after criticism from a slew of current and former athletes with health concerns.

“YESSSSSS CANADA!!!!!!! pulls out of OLYMPICS UNLESS IOC POSTPONE!!!,” tweeted U.S. hurdler Lolo Jones. “OUR HEALTH IS MORE important than sport. Hopefully the UNITED STATES is next.”

The U.S. Olympic Committee said it will not be commenting on Sunday about Canada’s decision.

The Olympics have never been postponed or canceled during peacetime but the IOC’s decision to even consider postponement was met with relief from several major stakeholders, including World Athletics, the International Paralympic Committee (IPC) and major national Olympic committees. The last major boycott of the Olympics was when the Soviet bloc stayed away from the 1984 Los Angeles Games, although North Korea and Cuba skipped the 1988 Seoul Olympics.

“As an Olympian, feeling for Team Canada athletes and coaches who have worked so hard ... I know these decisions will impact many beyond sport,” tweeted Charmaine Crooks, a five-time Canadian Olympic sprinter and former IOC member. “Health first.”