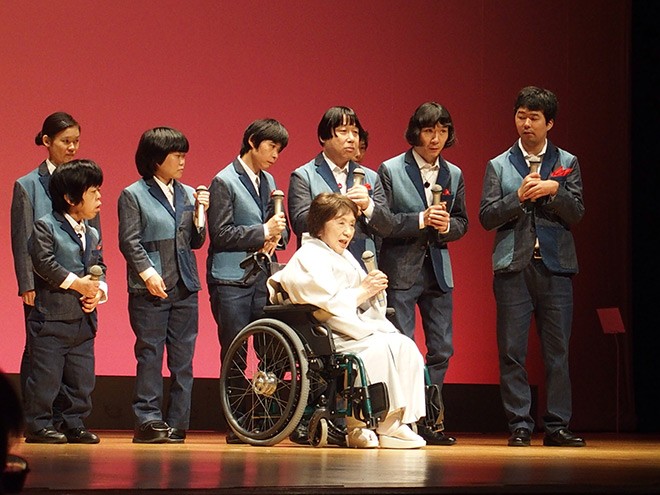 Mariko Miyagi, in a wheelchair, sings with students at Nemunoki Gakuen school for children with physical disabilities in Tokyo in 2016. (Asahi Shimbun file photo)

Mariko Miyagi, a singer and actress who staked her personal fortune to establish a school for children with disabilities at a time when society preferred to look the other way, died March 21. She was 93.

Originally from Tokyo, Miyagi made her debut as a singer when she was 22 and found fame with “Gado-shita no Kutsumigaki” (Shoeshiner under the Girder Bridge), released in 1955. By this time she had already taken up acting.

Born Mariko Honme, she moved to Osaka when she was in elementary school. Her mother died when she was a young child.

A visit to a facility for children with disabilities to prepare for a role in a stage musical sparked a lifelong passion to help such youngsters. In the musical, she played a girl with cerebral palsy.

Under the setup back then in Japan, children with severe disabilities were exempt from compulsory education, which meant they usually got no schooling.

So Miyagi decided to establish a school for them at her own expense.

“It is a matter of course that children should receive an education and be loved, regardless of whether they have disabilities,” she told The Asahi Shimbun in a 2018 interview. “I thought If nobody founds a school, then I would.”

Her determination to help children with disabilities gain access to education and welfare programs materialized in Nemunoki Gakuen school for physically disabled children that she established in what is now in Omaezaki, Shizuoka Prefecture, in 1968.

The school aggressively introduced art and music lessons in its programs. Drawings by the students were displayed at exhibitions in and out of Japan.

The school moved to Kakegawa in the prefecture in 1997.

Miyagi was also known for her association with Emperor Emeritus Akihito and Empress Emerita Michiko stretching over more than 40 years through her commitment to programs to help people with disabilities.

In December 1976, she was invited to the couple’s residence to show off drawings by children at Nemunoki Gakuen. Michiko also visited exhibitions of their paintings.

Katsunori Fujii, head of the Japan Council on Disability, said Miyagi drew attention to the issues and challenges that people with disabilities face.

“Miyagi was a groundbreaker in establishing a venue allowing for education and a means to have a livelihood for people with physical disabilities at a time when society lacked a system to help them,” Fujii said. “She played an important role in making society aware of the problems surrounding people with disabilities.”