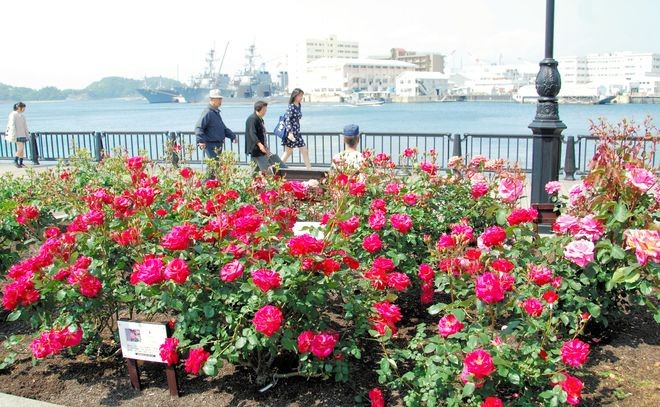 ah, but smell what the roses have to offer

a noisy
lark
in the shadow of history
--Jolanta Kajzer (Poland)

Rolling wheels and waves
Will it be that I find rest
In Matsuyama?
--Aaron Ozment (Kagoshima)

kintsugi …
we are
together again
--Srinivasa Rao Sambangi (India)

A record 4,181 artistic works were entered into the 9th Setouchi-Matsuyama International Photo-Haiku Contest. Coveted recognition in Japanese and English categories included goods worth 104,000 yen plus four grand prix, eight awards for excellence, and 32 honorable mentions. 1,748 contestants wrote in English. Marita Gargiulo led a field of 1,206 contestants who vied to compose haiku about one of 12 photos of Japanese tourist spots that had been provided by the organizers. Prompted by a photo of a man seated on a bench in Verny Park gazing at a warship docked in Yokosuka, Kanagawa Prefecture, the American crafted this narration on three lines to win a grand prize.

ah, but
smell what the roses
have to offer

A photo of the Imperial Hotel Meiji Mura, located in Inuyama, Aichi Prefecture, inspired Polish haikuist Jolanta Kajzer to be honorably mentioned. She imaginatively added the sound of an unseen bird.

a noisy
lark
in the shadow of history

Madhuri Pillai, an Australian haikuist, picked up an award for excellence for describing the gestures of a tour guide talking to guests at Sakamotoya Pilgrim’s Lodge in Matsuyama. Darrell Lindsey from the United States also won an award for excellence for pointing out how the entrance sign to a lively red-light district in Tokyo resembles lips with shining white teeth.

village storyteller …
the stretch
of her imagination

Kabuki-choa girl with ruby lips
whispers in the night

Proving its international acceptance as a new literary genre, the number of photographs submitted along with a haiku in English soared to a record 542 entries. Harri Mannonen took home a second-place prize for excellence to Finland for a monochrome photo and these 17 syllables anchored with an archaic word meaning you.

Canadian Diane Descoteaux also won a prize for excellence by catching the judge’s attention with the whiff of a delicious pudding baking in a cottage with a view overlooking the sea.

with every breath
it’s moving in the oven--
wildberry pudding

These next seven photo-haiku were honorably mentioned for helping viewers to feel, hear, smell, taste as well as see what had been experienced. Jay Friedenberg submitted his haiku along with a photo of colorful dinghies moored alongside a street in a fishing village.

drying nets
the sound of laughter
from the fisherman’s pub

summer fling over
the wild wave swept
out to sea

lost …
I return home
to the sea

Yukiko Yamada submitted a photo of cranes being operated by longshoremen.

to the world
that you couldn’t see
new year starts

Marion Clarke eyed a tempting dishful of colorful torpedo-shaped candies in the U.K.

Grandma’s house
so many memories
to choose from

Agnes Eva Savich wrote rhetorically while peering from a bus window in Texas.

early summer
what if I boarded
a different bus?

Arvinder Kaur shared a selfie from a cruise ship.

deadlines …
for now the lullaby
of gentle waves

Skilled artists in 47 countries submitted entries, including a surge of young Chinese writers as well as debuts from Finnish, Singaporean, Nepalese and South Africans. Congratulations to everyone who contributed to the success of the 9th Setouchi-Matsuyama International Photo-Haiku Contest in cooperation with the Asahi Culture Center and The Asahi Shimbun.