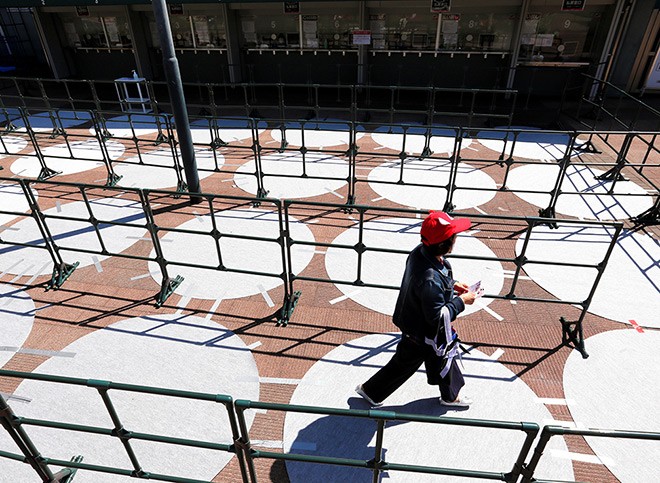 Fences are set up and circles are drawn in front of the ticket windows at Mazda Zoom-Zoom Stadium Hiroshima, home of the Hiroshima Carp, so that fans standing in line to get refunds for canceled games can maintain a safe distance from each other. (Koichi Ueda)

Baseball fans hoping to see the season opener in early April have been thrown a curveball again, thanks to the uncertainty over the COVID-19 pandemic.

Nippon Professional Baseball on March 23 announced a second delay to the start of the baseball season, with opening day moved to April 24.

Due to the spread of the infectious disease, NPB had postponed the March 20 season opener to April 10 at the earliest.

But the officials decided to move the date back two more weeks at a meeting of representatives of all 12 NPB teams.

“It remains fluid,” NPB Commissioner Atsushi Saito said of the opening date. “It is difficult to say that the games will start on April 24 no matter what it takes. But we will make our best effort.”

The post-season Climax Series, which determines the champions of the Central and Pacific leagues, will still be played, the officials said.

Officials of the NPB and the professional soccer J.League have formed a panel to assess the effects of the virus outbreak on their respective sports.

At the fourth panel meeting held earlier in the day, the NPB officials were told by a group of experts that it would be “very difficult to start the season early.”

Each team has stockpiled antiseptics and other items and taken anti-coronavirus measures to prepare for the season being delayed one month.