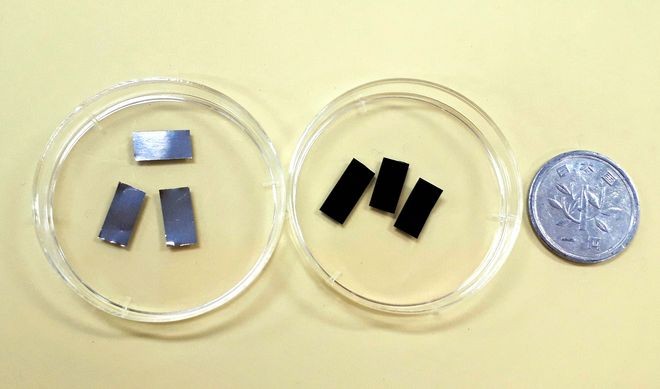 Titanium adhesive tape, right, shown in Okayama has a black appearance compared with the ordinary titanium tape next to it because it has been treated with acids. (Michiko Nakamura)

OKAYAMA--When stuff breaks, in a pinch many turn to tape to slap all sorts of things back together.

But while taping together human muscles and body tissue would seem a stretch, doctors will soon be able to do just that, thanks to a group in Japan that invented an extra-strong titanium tape.

A team of researchers here developed an adhesive tape made of titanium that tenaciously and instantly connects muscles and other kinds of living tissue.

The adhesive material fashioned from the metal has far better bonding strength than existing bio-adhesives and can be produced at a much lower cost, according to the scientists from Okayama University.

The team expects its invention to be utilized for a broad range of applications, including cardiac pacemakers and other tiny devices embedded in patients' bodies.

Bio-microelectronic chips used increasingly widely in Europe for personal identification as well as nerve stimulators and other body-embedded medical apparatuses are expected to spread further in the future with the advancement of information technology.

The new tape "has a huge advantage given that the body-embedded apparatuses can be fixed safely and cheaply with it," said Masahiro Okada, an associate professor of biomaterial research at the university, who analyzed test results of the material.

Takuya Matsumoto, a biomaterial study professor at the university's Graduate School of Medicine, Dentistry and Pharmaceutical Sciences, and his colleagues created the tape simply by flattening titanium into a thin aluminum leaf-like sheet and soaking it for 10 minutes in a highly acidic liquid comprised of hydrochloric and sulfuric acids.

The treated metal was then sterilized before use.

An electron microscopic examination showed the surface of the 15-micrometer-thick, acid-exposed titanium material (one micrometer is 1/1,000th of a millimeter) became rough due to the effects of the acids, according to Matsumoto and other team members.

Ordinary untreated titanium tape has little adhesive capacity, but the acidic processing converted the metal into a powerful adhesive that can be applied to proteins, lipids and other types of living tissue.

The tape exhibited more than three times the viscosity of a conventional protein-based fibrin adhesive in a tensile strength test where scientists used the dermis of a mouse, a layer beneath the skin's surface.

The team has already succeeded in more than doubling the adhesive level further, Matsumoto said, adding that another advantage of the invention is that it's easier for medical personnel to handle because it doesn't stick to skin.

The team's findings were published on the online edition of the German journal Advanced Materials Interfaces on March 23.

EDITORIAL: The time is ripe for Japan to end exports of coal-fired plants