Olympic delay may cause estimated 640 billion yen in economic losses 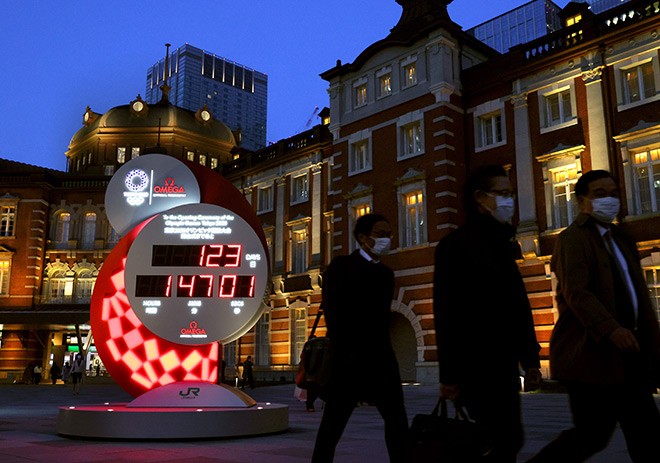 A countdown clock toward the opening of the Tokyo Olympics is displayed in Tokyo’s Chiyoda Ward on March 23. (Toshiyuki Hayashi)

Japan’s economic losses from a one-year postponement of the Tokyo Olympics could top 640 billion yen ($5.807 billion), with the already struggling tourism industry getting hit particularly hard, according to an estimate.

A cancellation of the event could cost Japan more than 4 trillion yen.

“We would face huge damages if the Games were postponed,” an official of a leading hotel said. “Demand from private travelers and for banquets have been dropping because of the novel coronavirus so it will be difficult for us to receive reservations for this summer.”

Calls have grown around the world for the Tokyo Summer Olympics to be delayed in light of the COVID-19 pandemic.

Accommodation facilities were expecting to fill 46,000 rooms during the Games with Olympic-related guests, such as sports associations, media representatives, sponsors and organizers.

All those reservations could be lost at once if the Games are delayed.

Travel agencies might also have to swallow enormous losses from a postponement of the Olympics.

JTB Corp., KNT-CT Holdings Co. and Tobu Top Tours Co. have sold package tours in Japan for the Games. In general, if the tours are canceled for reasons beyond the control of the travel companies, the contracts are dissolved and the fees are refunded.

However, travel agents are not sure if the stipulation would apply if the Games are postponed.

“All we can do is to follow the decisions made by the Tokyo Olympic organizing committee and others,” an official of a travel company said.

If the Olympics are suspended with no clear rescheduling date because of the virus, the tourism industry would face a prolonged period of uncertainty.

According to a calculation made by Katsuhiro Miyamoto, a professor emeritus of Kansai University who specializes in theoretical economics, a one-year postponement of the Olympics would cause 640.8 billion yen in economic losses for Japan.

In addition, 218.3 billion yen’s worth of economic effects from promoting sports and culture as well as expanding the use of advanced technology would be lost with a postponement, Miyamoto said.

Manufacturers, retailers and the services industry had expected a surge this summer in new television purchases, spending at restaurants and sales of Olympic goods.

However, if the Olympics are put on hold, such a consumption boost cannot be expected, and the optimism of related industries and Olympic sponsor companies would be deflated.

If the Olympics are canceled, Miyamoto estimated the economic loss at 4.5151 trillion yen.

“It is wrong to think that economic effects will be unchanged if the Games are postponed,” Miyamoto said. “A considerably large economic loss would be expected.”

(This article was written by Keiko Nannichi and Masaki Hashida.)